SIG Sauer is getting into the ammo business. They’re launching a new line of self-defense ammunition called SIG Elite Performance in popular semi-automatic handgun calibers from .380 to .45 ACP.

The cartridges use what SIG calls a “stacked” V-Crown hollow-point projectile that has a standard cavity up front with a small, deep cavity that reaches deep into the lead core of the bullet. This is to help deliver controlled, even expansion.

These are “introductory loads,” SIG will be expanding with more bullet weight options and rifle calibers as well. 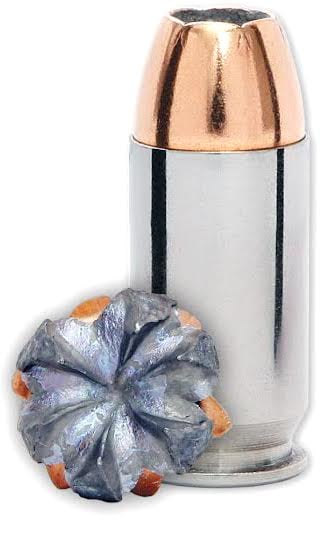 “Every product SIG Sauer produces will have the same attributes for which our firearms are known around the world — reliability, accuracy, and unparalleled performance,” said Jeff Creamer, SIG Sauer director, in a press release. “This new Elite Performance Ammunition consistently delivers controlled, uniform expansion and terminal performance, round after round. We are excited to enter the ammunition market and will be adding additional bullet weights for pistols as well as rifle ammunition in the months ahead.”

In addition to featuring the V-Crown cavity design the jackets of the bullets are cannelured into the lead core, crimping the two together. This is to prevent jacket separation which not only means better weight retention it also promotes predictable expansion.

While many premium ammo makers use nickel-plated brass, SIG uses Techni-crom for its cartridge cases. This finish promises better corrosion resistance than nickel as well as having a lower friction coefficient, which means better feeding and ejection, two of the more common causes of pistol stoppage.

The ammo is being made here in the U.S. to the same standards as SIG’s firearms. SIG designed its own loading equipment and loading process for the Elite Performance ammo and each round is hand-inspected before shipping.

The ammo isn’t hot and it’s not light, with muzzle energy about average for non +P loads, with exception of their .45, which according to the specifications makes a pretty soft 374 foot-pounds of force at the muzzle. Compared to the .357 SIG, which is rated at 510 foot-pounds, that’s a bit of a drop. The information listed on the website may also be inaccurate at this time.

We will have to wait for independent testing, of course, but it’s good to see another new name in the ammo business. Hopefully future loads will include some more economical target loads as that’s what the market really needs right now.

If you’re thinking about trying out some SIG ammo, perhaps in your SIG handgun, head over to the product page for detailed specifications.