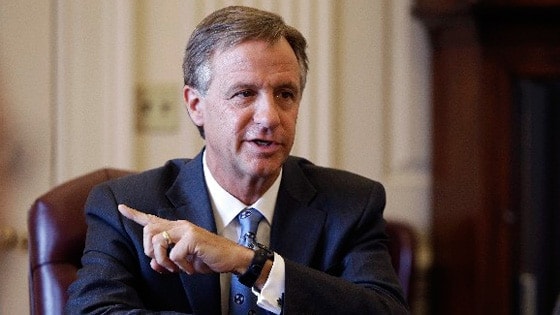 Gov. Bill Haslam’s administration has apparently tied a $100,000 anchor to the pending open-carry legislation in Tennessee by demanding a change in format to gun permits in the state. (Photo credit: AP)

After passing the state Senate by a landslide last week, Tennessee’s open carry bill is stalled over word that it would cost $100,000 to implement.

The reason for this expenditure would be to pay the state’s vendor for handgun permit cards to modify the design to remove open carry language from its layout. Currently the permit allows either concealed or open carry.

Since the state’s $32 billion operating budget is all but finalized, shoehorning the extra expenditure into its ledger is unlikely.

“I would say it’s in grave doubt, because the outlook in the House Finance Committee, which is the next hurdle it would have to pass for, can’t even get to the floor is not good at all,”  said Memphis Flyer political analyst Jackson Baker about pending Senate Bill 2424, which would allow open carry in the state without a permit.

Passing the state Senate by a 25-2 vote last week, the measure was transmitted to the House Finance Committee on April 10. There it was halted by an updated Fiscal Review Committee note that the bill would require a one-time expenditure of $100,000 to implement. This money would go to modify the format of the state’s concealed carry cards.

“Card production is provided by a third party vendor and all design changes must be performed by this vendor. The one-time cost associated with making changes to the permit for concealed handgun carry permits is estimated to be $100,000,”  advises the note, which was not an issue until after the bill was approved by the senate.

However, the note itself goes on to state that, “If the Department does not make any changes to handgun carry permit cards, the fiscal impact for the bill as amended is not significant.”

Further it maintains that, “The legislation does not require nor will it cause the Department of Safety to make any changes to handgun carry permit cards.”

The note came along with a flag from the governor’s office stating that he believes that the state’s permits should be modified to reflect the change brought about by the bill.

Many supporters of the bill are crying foul at this last minute maneuver by the administration.

“It is interesting that the facts continue to evolve and it appears that the Governor/Administration may have intentionally falsified a financial estimate to try and kill the legislation,” said John Harris, Executive Director of the Tennessee Firearms Association (TFA), to Guns.com Monday. The TFA and other gun-rights organizations in the state support SB2424.

Gov. Bill Haslam’s office, while acknowledging that Haslam opposes the bill, declined to respond directly to contentions by a gun-owners advocacy group that the tactics used in blocking it so amount to providing the Legislature with “false or misleading information.”

With time running out in the current session, if SB2424 is not sent to the floor for a vote in the next few days, it will die in committee.