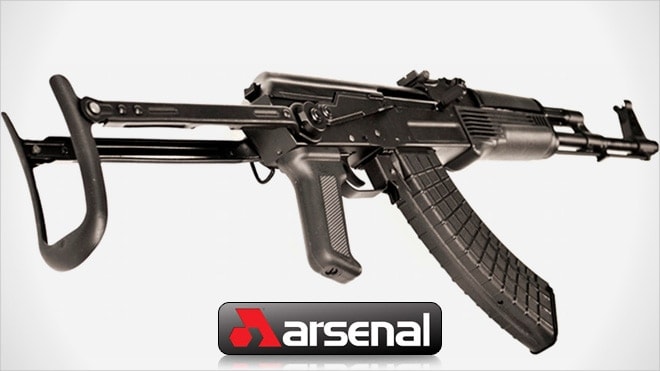 Arsenal has announced a gem of a new rifle with the SAM7UF, a premium Bulgarian-made underfolding AK. Without knocking any popular and well-proven underfolders, it’s hard to beat the quality of an Arsenal rifle. With this underfolder you don’t sacrifice fit or finish in order to get the iconic folding stock.

It is fit with all the parts you’d expect on a true AK rifle, including the stainless steel heat shield, 90-degree gas block and bayonet lug. The barrel is threaded for AK-pattern 14x1mm left-hand muzzle devices. The SAM7UF comes with a thread protector installed.

This isn’t the first time Arsenal has produced the underfolder, but the first run, two years ago, was a limited edition. Those rifles sold for upwards of $2,000 new.

These new rifles are priced at just $1,299. While that may seem like a lot for a Zastava, Arsenal’s rifles aren’t in the same class. The new SAM7UF is priced quite competitively even with the uncommon stock.

“The SAM7UF utilizes the modern straight-back under-folding stock, which locks perpendicular to the action and the bore of the rifle,” explained Arsenal in a release. “In order to provide a more secure and firm lock, whether in a folded or extended position, this stock locks on both sides of the receiver with four solid pins. This, with the additional reinforcement in the arms of the stock, stabilizes the rifle, which significantly reduces the climb and gives the shooter much firmer control over the firearm for improved accuracy and effectiveness.”

Underfolders aren’t for everyone. The stock takes getting used to and can be intimidating to shooters accustomed to traditional stocks.

But for people who have come to know and love their function, underfolders are go-to rifles for just about any occasion.

Chambered for 7.62×39, the SAM7UF can tap the still-inexpensive supply of Eastern European ammo, and it will of course have no problems eating steel-cased ammo all day long.

And as a bonus, Arsenal will include a coupon for $50 for Arsenal accessories through K-Var with this batch of SAM7UF rifles. Can’t ever have too many magazines.

For details and specifications head over to the Arsenal product page. For everything else, go to K-Var.com.