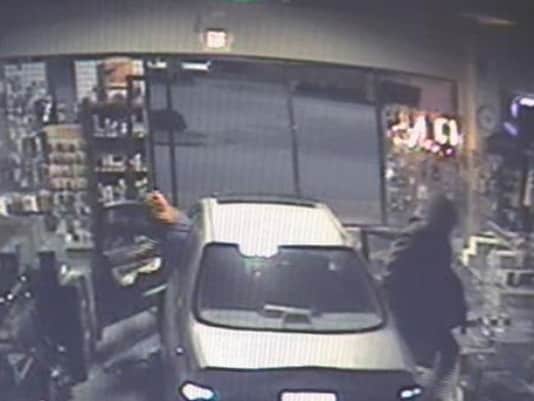 In 2013, FFL holders suffered nearly 20,000 guns lost, taken in robberies, or stolen, such as in this daring smash and grab burglary. (Photo credit: WXIA)

The nation’s more than 60,000 Federal Firearms License holders reported 19,601 firearms lost or stolen in 2013, according to a new report published by the ATF but mandated by the White House.

The FFL Theft-Losses Report (pdf), compiled by the Bureau of Alcohol, Tobacco, Firearms and Explosives, draws its information from the agency’s Firearms Tracing System (FTS), which tracks guns reported lost or stolen firearms reported by FFLs.

This new annual report is part of President Obama’s series of 23 executive actions implemented in 2013 in response to the mass shooting at Sandy Hook Elementary School in Newtown, Connecticut. One of those actions required the Department of Justice to prepare a report analyzing information on lost and stolen guns and to make the report widely available, hence the new FFL Theft/Loss Report.

As mentioned, 19,601 firearms of all types were lost or stolen across all 50 states and Puerto Rico. Washington, D.C., had no firearms reported lost in 2013, which is likely because there are no longer any licensed FFL holders in the district.

The vast majority of these,  76 percent or 15,077, were classified as lost. Nearly a third of firearms reported lost came from audits of manufacturers in Kentucky and New York that showed over 6,000 receivers and frames lost.

Guns.com spoke with an industry insider who explained that the receivers “lost” in many cases were more than likely never made.

“They would have been serial number assigned over time and never actually made,” said the source.  “ATF regs require a report to close out the acquisition so it makes it seem like a lot of missing frames/receivers but it is not the reality, it is a matter of paperwork.”

Burglary and larceny reports were highest in Georgia, where gun shops lost 459 firearms in 56 incidents. This trend could well continue in the Peach State as a shop in rural Coweta County was the subject of a $70,000 smash and grab burglary in January that netted the crook nearly 30 guns. 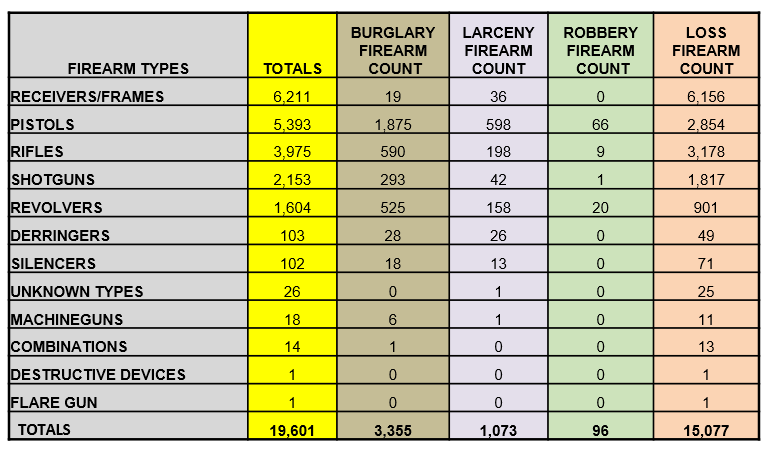 In all, nearly 20,000 firearms were reported lost or stolen in 2013. (Photo credit: Bureau of Alcohol, Tobacco, Firearms and Explosives, Office of Strategic Intelligence and Information)

Thankfully, incidents of robbery of FFL holders were low last year with just nine reports, two each in Texas and North Carolina as well as isolated incidents in Alabama, Arizona, Florida, Georgia and Indiana. When contrasted with the 338 burglaries and staggering 600 larcenies reported nationwide to the ATF in which guns were taken, this figure appears low.

Handguns are the choice target for gun theft, accounting for 56 percent, or 2,539 of the 4,524 guns of all kinds taken through burglary, larceny or robbery from FFL’s in 2013. Licensees must report to the ATF each missing, lost or stolen firearm within 48 hours of discovery of the loss or theft by completing and forwarding a FFL Theft/Loss Report.

The ATF routinely offers rewards for information leading to the conviction of those involved in FFL burglaries, larcenies and robberies such as the $5,000 put up for a recent theft in Utah.  These rewards are often matched by industry groups such as the National Sports Shooting Foundation.

When taken as a whole, the figures are low, especially compared to the record 8.57 million firearms produced in 2012.

For more information on reporting lost or stolen firearms to the ATF for FFL holders go to the agency’s website.  For personal firearms the ATF has a pamphlet that includes a sample firearms record for documenting your collection.