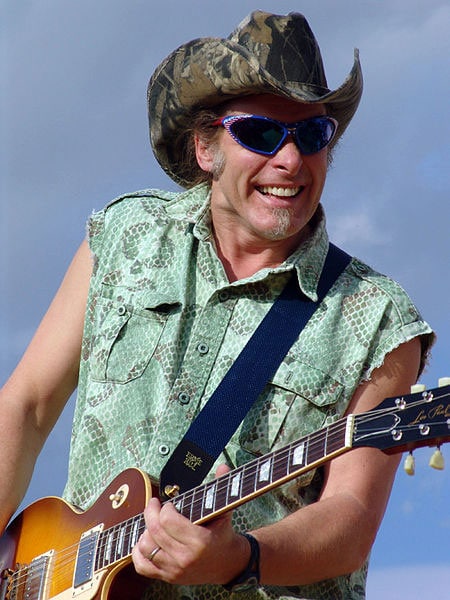 A gun control group is currently putting pressure on organizers of a summer music and food festival in Maumee, Ohio, to nix the Motor City Madman from the lineup.

The Coalition to Stop Gun Violence wants The Toledo Blade newspaper, which is sponsoring the event, known as the Northwest Ohio Rib-Off, to “Cancel Ted Nugent’s appearance immediately.”

Citing examples of Ted Nugent’s inflammatory rhetoric, including at the 2014 SHOT Show where he called the president a “subhuman mongrel” in an interview with Guns.com, CSGV Executive Director Josh Horwitz is urging Buckeye State residents to sign a petition in protest of Nugent’s scheduled appearance.

“If we can make a strong show of opposition, I am certain we can sway [The Blade] towards the right decision,” Horowitz wrote in an email about the anti-Nuge campaign.

Additionally, the petition states in part that,”The Northwest Ohio Rib-Off webpage brags that ‘nothing goes better with savory BBQ than jamming, rib-bone in hand, to a rocking band.’ Certainly, nothing goes worse with good food than the virulently racist rhetoric of a man who has no regard for the dignity or rights of others.”

Thus far, it appears that the campaign is having an impact, at least enough to make organizers reconsider which talent to book next year but apparently not enough to make them rescind the deal with Nugent.

“All things being equal I wouldn’t bring in a guy who is aggravating people, that is not my intention,” said Mike Mori, The Blade’s sales director, who runs the Rib-Off, in an interview with Media Matters. “It seems like this thing has kind of ballooned in the last couple months. I will probably think long and hard about inviting him next year.”

Mori confessed that he was “not a fan of the guy’s politics,” but added that he likes to invite headliners from across the music spectrum, paying them in excess of $50,000 and that once they’re booked he owes them the money no matter what, i.e. even if he were to cancel the act.

“I have to pay him that even if it rains,” Mori said. “I wish the guy would just not say the things he does, he brings a big audience, he’s from Michigan, he packs the place. If everyone hated him, nobody would come. He does have a following, it’s a tough situation. I try to have a diverse type of a line-up.”

Mori said he fielded “quite a few” calls from readers concerned about Nugent’s appearance.

“It surprised me how many calls I got,” he said. “I’m listening to the people and I probably will do something different next year if I can.”

It’s clear that not everyone is a fan of what Nugent refers to as his “Detroit street fighter rock ‘n’ roll stage rhetoric.” In fact, the town of Longview, Texas, recently announced that it would pay Nugent $16,000 to not rock out at their Fourth of July Festival because he was “not the right feel for this kind of community event.”

The city originally scheduled Nugent to headline at the Maude Cobb Convention and Activity Center, but later changed their mind and paid the Motor City Madman half of his guaranteed $32,000 performance fee, Huffington Post reported back in March.

Guns.com reached out to Nugent and the Coalition to Stop Gun Violence about their campaign and are awaiting a response.