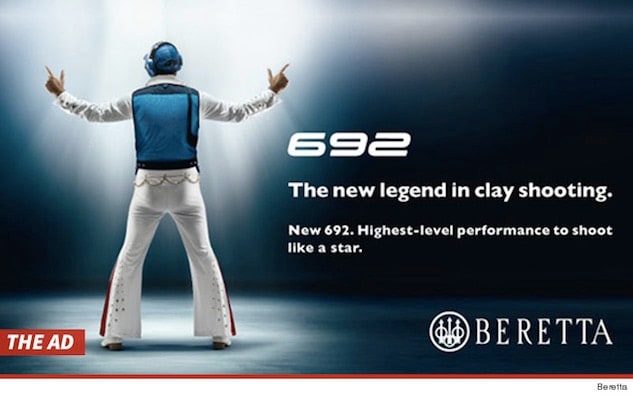 The initial ad in question.

The Elvis estate filed a civil suit against Beretta on April 10 for falsely suggesting that the King is promoting the Italian gun makers new shotgun.

The estate, formally known as Elvis Presley Enterprises, Inc., is asking for $75,000 in damages because of Beretta’s ad campaign promoting the Model 692, an over/under shotgun, according to the complaint.

While the estate claims the ads launched around January 2014, it actually launched late 2012. However, the statute of limitations for this type of damage is difficult to say since the complaint was filed in state and federal courts against an international company (EPE cited Fabbrica d’Armi Pietro Beretta S.p.A. as the defendant, not Beretta USA), according to various sources.

The ad show’s what appears to be Elvis wearing his rhinestone-studded jumpsuit, a shooting vest and ear protection while wielding dual finger guns, and is accompanied by the caption, “The new legend in clay shooting … Highest-level performance to shoot like a star.”

“Elvis’ interest in firearms and target shooting is well-known by his fans and gun aficionados. Gun enthusiast and Elvis fans also know that Elvis was the owner of a Beretta-made firearm,” the estate argues. And adds, “Beretta made a deliberate and intentional decision to tie its new product, Model 692, to Elvis and trade on his popularity to generate as much publicity as possible.” 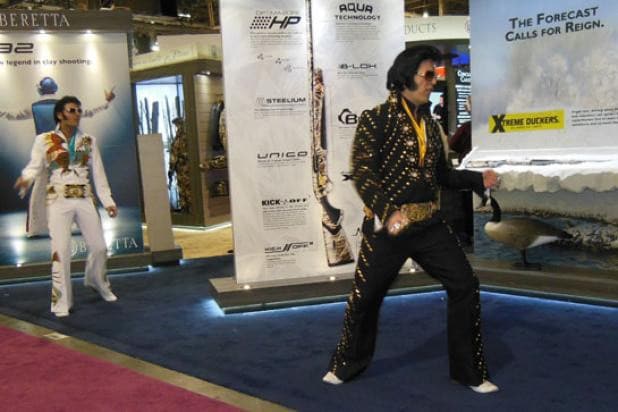 Elvis impersonators at the Beretta booth during the 692 launch at SHOT Show 2013. (Photo credit: Field & Stream)

The estate claims that the ad campaign introduced the gun in Dandenong, Australia; London, England; Burguillos, Spain; and at the Shooting Hunting Outdoor Trade Show in Las Vegas, Nevada.

Additionally, at each opening Beretta had Elvis impersonators appear, perform and greet gun enthusiasts, the estate alleges. In some cases, the company had the impersonators pose with weapons.

On Jan. 28, 2014, — five days after SHOT Show ended — the estate said that it sent Beretta a formal cease and desist letter, asking the gun company to pay for the use of the Elvis intellectual property, but it refused.

Beretta has until May 1 to respond to the complaint.