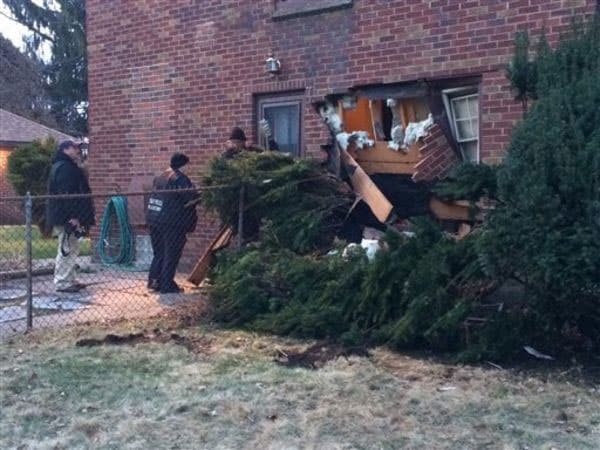 The Thursday morning incident left extensive damage to the home which the suspect crashed into after being shot. (Photo credit: MLive)

In a scenario that seems to be increasingly common in Detroit, a homeowner shot and killed one of three intruders who broke into his home just after midnight Thursday.

Detroit Police Sgt. Michael Woody told reporters that the three suspects broke into the home through a side window while the homeowner and his brother were playing video games in the basement.

When the two men heard the commotion upstairs, the homeowner, who was armed, went upstairs where a confrontation between the man and the intruders ensued. The homeowner shot at the suspects who then tried to run out of the house, but initially found themselves trapped before kicking through a security screen on the front door to escape.

But the fight was far from over.

The homeowner then chased after the suspects as they ran out of the house. Two fled on foot while the third headed for a car parked outside.

As the third suspect got into the vehicle, he began shooting at the homeowner, who returned fire, striking the suspect as he began to drive in reverse. Once hit, the suspect spun out of control, running over a street sign before hopping the median and crashing into a neighboring home.

A young woman inside the home became pinned inside the downstairs bathroom.

“When she screamed, I thought she had been shot,” said Raymond Bradley, the woman’s father. “I didn’t know if she was outside. She was pinned in the bathroom just saying, ‘Don’t leave me, don’t leave me.’”

And, of course, Bradley stayed with his daughter until help came.

She suffered minor injuries and was transported to a local hospital where she spent most of the morning but is now home recovering. She told reporters that even though she is currently in some pain, she’s going to be okay.

The driver of the vehicle was pronounced dead at the scene, although authorities would not confirm whether they he died from the gunshots or the car crash.

The remaining suspects have not been caught and unfortunately a good description of them is not available. Amongst the commotion, the homeowner could only say that one of the suspects was a black male about 5-foot-10 with an extremely thin build and wearing all black.

It is unclear at this point if the homeowner will face any charges in the shooting, but he was never taken into police custody either. Ultimately that decision will fall on the Wayne County Prosecutor.

However, authorities did confirm that although this shooting has not yet been ruled justifiable, there have been 10 recent justifiable shootings resulting in eight suspects being killed.

And Detroit Police Chief James Craig continues to stand behind his controversial statements made earlier this year, urging residents to learn to protect themselves.

“Detroiters are fed up,” Craig said last week. And they’re firing back, hoping that criminals will soon get the message.