To be in accordance with the sweeping gun-control law, all of those citizens in possession of a so-called ‘assault weapon’ were to have it registered with the state by April 15 — this past Tuesday.

Yet, in an act of civil disobedience, a group of gun owners opted to take a stand against the mandate by shredding the requisite forms and paperwork in front of the Walter J. Mahoney State Office Building.

“We will not register our firearms, any firearms whatsoever,” one protestor told WIVB-TV. “It’s been done before, historically. And historically, registration has always led to confiscation.” 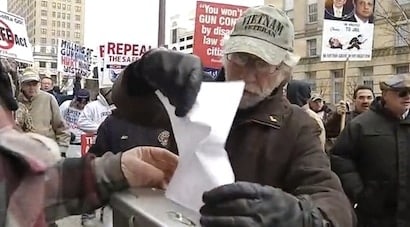 According to another protester, the shredding of the documents was symbolic of the figurative shredding of the Constitution state lawmakers participated in when the voted in favor the SAFE Act following the mass shooting at Sandy Hook Elementary School in December 2012.

Under the SAFE Act, the definition of ‘assault weapon’ was expanded to include any semi-automatic rifle with a detachable magazine that has one or more of 10 cosmetic traits, including a pistol grip, folding stock, threaded barrel or bayonet mount, among others.

Failure to register an ‘assault weapon’ by the deadline is punishable as a misdemeanor “and forfeiture of the weapon,” according to state police. If it is “deemed to be unintentional,” a 30-day amnesty period will be extended so that the gun owner has an opportunity to register it, render it permanently inoperable, turn it over to police or sell it out of state.

Like with the group in Buffalo, there are many gun owners who are intentionally flouting this portion of the SAFE Act. One can only hope that their opposition efforts take hold and the law is eventually repealed by the Legislature or struck down in court.