Former Army Sgt. Kyle. J. White, 27, will be awarded the Medal of Honor for his actions during a 2007 ambush in Afghanistan.

White was taking part in a meeting with village elders in Aranas when he, along with the rest of his 14-man team of U.S. soldiers and attachment of Afghan National Army soldiers, were ambushed.

White was knocked out but when he regained consciousness he discovered most of the other soldiers had slid down a 150 cliff seeking cover. White faced enemy fire to provide medical aid for the few soldiers that were nearby, Fox News reports. 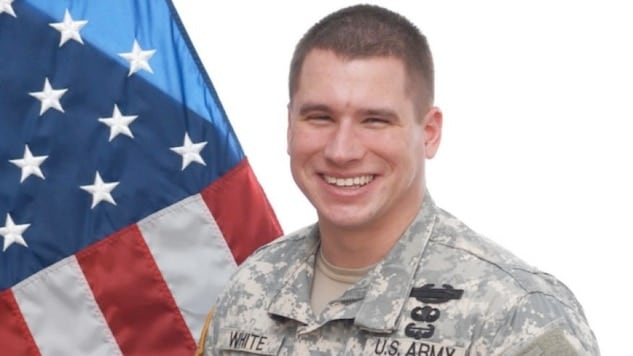 Former Army Sgt. Kyle. J. White will receive the Medal of Honor for his actions during an hours-long gun battle in village in Afghanistan.

When White came to, only platoon leader 1st Lt. Matthew C. Ferrara, Spc. Kain Schilling, Marine Sgt. Phillip A. Bocks and the group’s interpreter were left on the top of the hill. They were pinned down by fire from multiple directions, but even though White was suffering from a concussion he ran and crawled his way towards his fellow soldiers to determine their status.

Ferrara had already died and Bocks and Schilling were badly wounded. Amidst the gunfight, White pulled Bocks to cover and treated his injuries, but he later died from his wounds. White also treated Schilling’s injuries, and he survived the attack and plans to attend White’s ceremony next month.

When President Obama presents White with the Medal of honor next month, he will become the seventh living service member to receive the award for actions in the Iraq and Afghanistan wars.

The ceremony will take place at the White House on May 13.