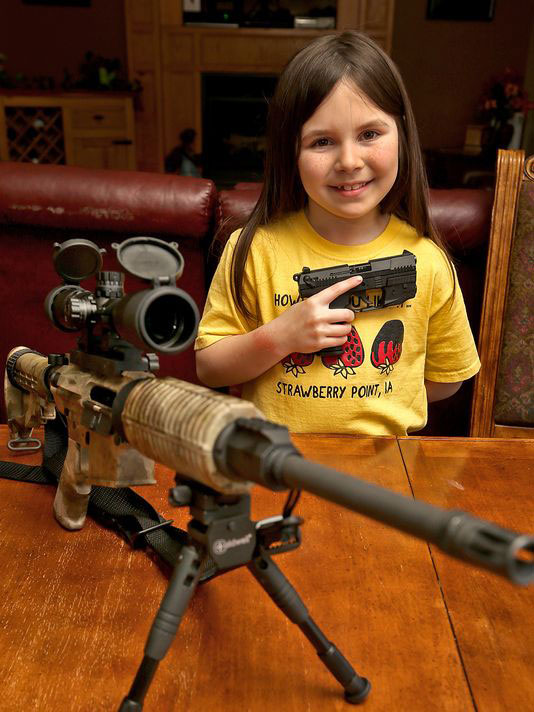 Eight-year-old Natalie Gibson cried as she walked out of the gun range after being asked to leave. According to her dad, Nathan, she thought she had done something wrong. (Photo credit: The Des Moines Register)

One Iowa father is speaking out against a state gun law after he and his daughter were asked to leave a gun range this past weekend because his daughter was too young to use a handgun.

Nathan Gibson told The Des Moines Register that he had weekend range trips with both of his girls – ages eight and 10 – nearly every weekend for the past several years. But after attention has been called to a state law that has long laid rather dormant, Gibson’s weekend gun time with his girls has come to an end because, according to the law, no youth under the age of 14 is allowed to shoot a handgun, even with adult supervision.

And although the range’s gunsmith who asked Gibson to leave was very polite, even apologetic in his request, it still didn’t sit well with the girls’ father, who immediately called his state representative, the Iowa Gun Owners, the Polk County Sheriff’s Department and other lawmakers to express his discontent.

Apparently the law had gone virtually unenforced for quite some time, but when Democratic Sen. Joe Riding made an attempt to expand the law and reduce the age from 14 to 12, his plans backfired. Not only was the law not amended, but it soon received public attention it had not had before, forcing local gun ranges to now abide by the law which they previously knew nothing about.

“It’s unfortunate,” Riding, who taught his own daughter to how use a gun when she was 9-years-old, told reporters.

Riding felt that the bill would have “sailed through” had the Iowa Gun Owners not pushed for removal of the age restrictions altogether.

But executive director of Iowa Gun Owners, Aaron Dorr, believes the only reason the age change even received support from the swing-district Democrats in the first place was because they were hoping to get credit from gun rights advocates during a tough re-election year.

“The real sad thing for us is more and more kids are now being kicked off gun ranges like the Gibson kids,” Dorr said. “But it’s a simple fix. Take out the age restriction.”

Yet there are those in the state that don’t believe children and guns mix on any account, but especially when handguns are involved.

Kathleen Adams, a psychiatric nurse who specializes in working with children and teens, says it’s not about target practicing or hunting and the idea of teaching youngsters to use a handgun is sending the wrong message.

“We should teach them ways to solve conflicts that don’t involve guns,” Adams said. “And it’s really important for kids to have confidence that their world is safe and that the adults in their world are going to keep them safe.”

Adams also adds that teaching kids to use a handgun suggests that they can use the gun in a situation the kid might feel is dangerous, regardless of whether or not there is an adult around.

But Gibson disagrees, saying that his daughters know they are not to touch any gun if he is not with them.

Anne Starr, the CEO for a psychiatric facility for youth between the ages of 10 and 17, feels that although keeping guns out of the hands of at-risk youth is imperative, she is admittedly undecided about the issue with those who aren’t at risk.

“In general, if you can limit access, particularly to kids who are less stable and are in treatment, and make it difficult for them to get any kind of weapon, that’s a good thing,” Starr said, adding, “Each kid is different in terms of their development and what they can and can’t handle and the culture in a family and whether guns are part of that culture.”

And in the Gibson family guns are very much a part of their culture, even for his daughters, who began to show an interest in their father’s hunting trips at a very young age.

“You teach them guns are a tool just like anything else,” Gibson explained. “I’m not a revolutionary guy. I’m not trying to overthrow the government. But I’m trying to teach them that guns have a purpose, and why they’re important.”

And according to Gibson’s 10-year-old daughter, Meredith, “It’s fun shooting my gun with my daddy.”

Perhaps for a young girl, it’s not so much about hunting, government tyranny or Second Amendment rights, but simply spending quality time with her dad.