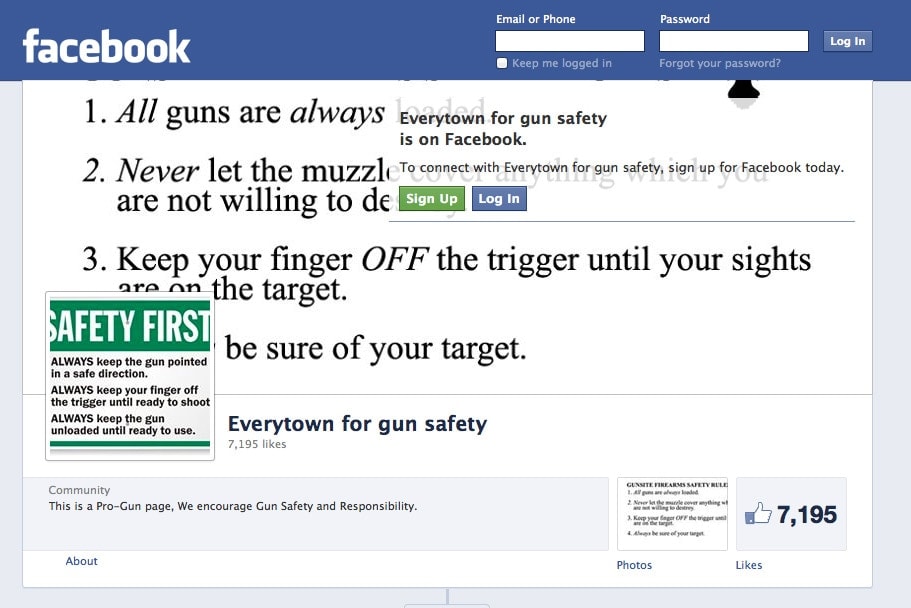 The ‘Everytown for gun safety’ Facebook page has grown significantly since the BuzzFeed article published.

A gun rights advocate claimed the “Everytown for gun safety” Facebook page before the newly formed Michael Bloomberg-backed group hopped on it.

The page launched shortly after Moms Demand Action and Mayors Against Illegal Guns merged on April 16, creating the Everytown group.

“Saw Bloomberg was creating another gun control group. So I took the page name before they had the chance. If you don’t like the 2nd amendment – LEAVE,” reads the first post of the page.

According to the about description, it’s a pro-gun page that encourages gun safety and responsibility.

“I took the Bloomberg name because I wanted this page to remain open to debate, unlike his group at Moms Demand Action that block anyone with alternative views,” the page admin, who wished to remain anonymous, told BuzzFeed. “Gun owners are getting a bad rep nation wide from their anti gun propaganda. As to who I am, I am your average citizen that believes the Second Amendment ‘shall not be infringed.’”

Since the Facebook page launched, it has gained more than 7,000 fans, posted numerous articles about the merger and gun safety guides for handling guns, and updated its avatar image about four times.

It’s unknown what will happen with the social media page in the near future, if it will be shut down or turned over to the gun control group.

The page admin told Guns.com that he’s had little to no contact with Everytown.

“Their followers have been posting numerous things on the page but I have not had any direct contact from any of Bloomberg’s official groups so far. The only response from them I have heard of is in the article on Buzzfeed where Mark Glaze commented on dueling us,” the admin said.