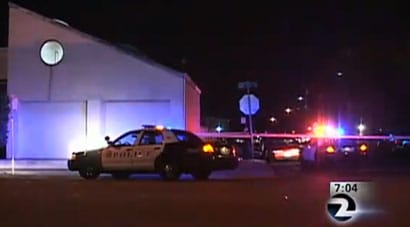 The suspect apparently thought that the business was just a commercial property and did not realize that the owner lived in the unit behind it. (Photo credit: KTVU)

A suspect is dead and a business owner remains in the hospital recovering from gunshot wounds after an attempted burglary in Richmond, California, turned into a shootout early Friday morning.

Just after 1 a.m. the suspect jumped a fence and broke into a plumbing business that he apparently thought was unoccupied at the time, a local ABC affiliate reported. But unbeknown to the intruder, the business owner and his wife live in a housing unit behind the store.

The business owner, who was armed, took the burglar by surprise when he showed up unexpectedly. However, the suspect was also armed and at some point during the confrontation there was an exchange of gunfire.

The suspect fled the scene after being shot in the chest, but the owner was also shot several times in the legs.

Thanks to ShotSpotter, which helps law enforcement track gunshots, police were alerted to the shooting incident before the man was ever even able to call 911.

When police arrived a short time later, the business owner was transported via helicopter to a nearby hospital. His injuries, although extensive, are not believed to be life-threatening.

Meanwhile, another man showed up at another hospital in an SUV with several other people. The man had received a gunshot wound to the chest and was soon pronounced dead. Authorities believe that the deceased man was likely the suspect who broke into the business earlier.

According to the people who brought the deceased man to the hospital, they were just passing by when they saw the injured man and, being good Samaritans, stopped to help him.

However, authorities do believe that they did in fact know the suspect. Police are not saying at this point whether they believe those occupying the SUV were also involved in the attempted burglary, but did confirm that they are all currently in custody. Police are also unsure if the business owner was shot by the suspect or another individual.

The investigation remains ongoing and no charges are expected to be filed against the business owner.