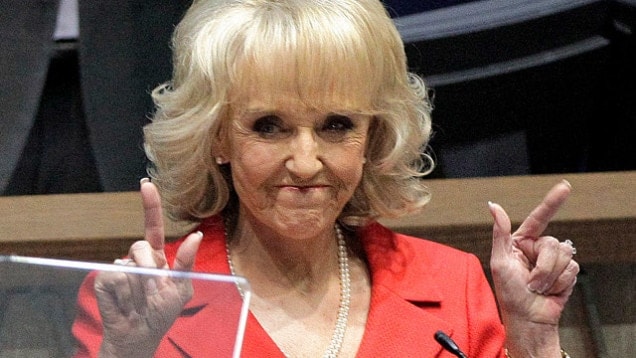 Gov. Jan Brewer has already signed one of four pro-gun bills sent to her desk this week.

It’s a busy week for Arizona Gov. Jan Brewer as the state Legislature has sent four new pro-gun bills to her desk for consideration while a fifth one is in its final motions.

The five bills include two that would expand concealed carry rights, another would make it a felony to wrest a gun from another person’s hands, while a fourth bill would set up state preemption of local guns laws. A final bill, signed by the governor already, protects personal gun ranges on private property.

All of these bills started in the state House and passed the Senate despite extensive Democratic objections.

“A right that you can’t exercise by shooting is not a right,” National Rifle Association lobbyist Todd Rathner said about the guns on private property bill, in comparison to a First Amendment right to own a typewriter without the ability to publish what has been written.

The NRA was a strong supporter of all five of the new bills.

The bill that has already been signed into law just hours after it passed, House Bill 2483, bans cities and counties from prohibiting or otherwise restricting the use of firearms on private property, protecting both shooting clubs as well as citizens who would set up their own personal shooting ranges contained on land under their control as long as the nearest occupied structure is more than a quarter-mile away. This measure passed the Senate by a 16-13 vote and was signed within hours of reaching the governor.

House Bill 2338 gives prosecutors in the state the ability to charge those who wrest a firearm from the hands of a gun user who was not in violation of the law with felony aggravated assault. Democrats contested this bill because the act of taking a gun from another is already a felony in the state. The measure passed the Senate by 21-7 but since that body amended it, it needs to be voted on again by the House before going to Brewer’s office.

If Brewer signs House Bill 2517 into law, local city and county boards who implement ordinances that are more strict than the state’s own gun laws could face fines of up to $5,000. Besides the fine, it would also allow the state to sue individual local lawmakers who establish such an ordinance. These types of preemption laws, modeled after Florida’s long-standing statute are growing across the country. HB2517 passed by a vote of 17-12 and has been transmitted to the governor.

“To protect Arizona’s law-abiding gun owners from a confusing patchwork of local gun laws, the state enacted a firearms preemption law over a decade ago. Unfortunately, some public officials are willfully ignoring the law, and they need to be held accountable,” said Catherine Mortensen, an NRA Spokesperson to Guns.com Thursday. “House Bill 2517 would finally hold local governments accountable for imposing gun control schemes that go beyond state laws.”

Yet another measure, House Bill 2103, which would allow military members who are at least 19 years old to obtain a concealed carry permit in the state, is also on Brewer’s desk. It passed the senate Tuesday by a 20-10 vote..

Of the five bills, House Bill 2339, which would allow Arizona’s 200,000 concealed carry permit holders to enter buildings, including most public buildings, that had ‘no guns’ signs posted, brought the stiffest resistance. The measure excludes those with enhanced security measures such as courts as well as schools and universities. While it passed the Senate by a narrow 16-12 vote with two abstentions, it is not guaranteed to be signed by Brewer who vetoed similar legislation at least twice before citing that, “Emotions can run high”.

We have whittled down our CCW laws over the last 10 years where they are unbelievably laughable,” Sen. Steve Gallardo, D-Phoenix, said about the concealed carry expansion, arguing there is little difference between those licensed to carry a concealed weapon and those who are not. “Just about anyone can obtain a CCW license.”

The governor is expected to make a decision on the pending legislation in coming weeks.