“Those people who hold themselves out to be patriots are not. They’re nothing more than domestic terrorists,” Reid said before the crowd attending the Las Vegas Review-Journal forum. “… I repeat: what went on up there was domestic terrorism.”

Reid pointed to the way in which the supporters were armed as a one way to justify the accusation.

“There were hundreds — hundreds of people from around the country — that came there,” Reid said. “They had sniper rifles on the freeway. They had assault weapons. They had automatic weapons.”

Along with the weapons, Reid claimed that they Bundy supporters had “children and women lined up because if anyone got hurt we wanted to make sure they got hurt first, because we want the federal government hurting women and children. … What if others tried the same thing?” 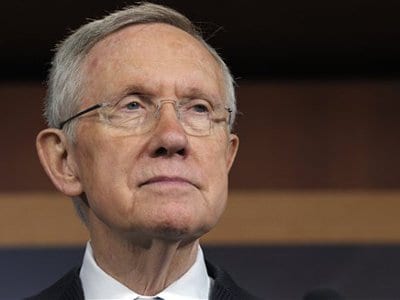 The spat between Bundy and the BLM is over the rancher’s delinquent grazing fees. Bundy owes approximately $1 million to the federal government.

From Reid’s perspective, it appears that this dilemma is a simple matter of a lawbreaker who refuses to adhere to the law, not one of government overreach and intrusion, as some Bundy supporters argue.

Reid was asked by the moderator of the event, Steve Sebelius, how the government plans on bringing the matter to a peaceful resolution given that some pro-Bundy folks are “willing to shed blood for the cause.”

“I hope that’s not the case,” Reid responded. “I repeat, we are a country of laws. … We can’t let this happen.”

Meanwhile, the Bundy family did not directly respond to Reid’s comments. However, they did post a video from another rancher, Cliff Gardner, called “The truth.”

In the video, Gardner says the heart of the dispute is over misinformation regarding the effect livestock has on the desert tortoise, one of the reasons why the BLM wants to regulate the grazing of Bundy’s cattle. Gardner claims that the relationship between cattle and the desert tortoise is actually symbiotic, not deleterious but that the courts have refused to recognize this research.

“I ask the people of America: Reconsider if you’re skeptical about the Bundy family, and look into the issue deeper yourself,” Gardner said. “Because I think you’ll find if we do not and we allow this federal government to increase its power and its jurisdiction further and further into the lives of everyday Americans, we’re very surely going to lose the freedom and liberty that America is supposed to be about.”