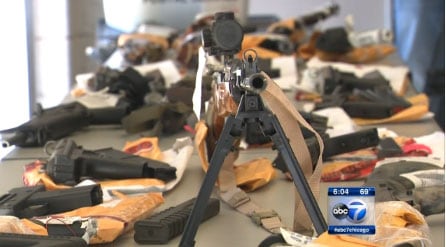 Every year Chicago collects more illegal guns than any other city in the country, but still has an ever-growing epidemic of violence. (Photo credit: ABC)

Following yet another violent weekend in the Windy City, local law enforcement and legislators are pushing for a bill that would increase penalties for certain gun violations.

“Every single year we take more guns off the street than any police department in the country, and nobody goes to jail for possession of those guns,” said Supt. Garry McCarthy of the Chicago Police Department, a local ABC affiliate reported.

And while it’s not entirely true that “nobody” goes to jail for those gun possessions, what is true is that most of those convicted of illegally possessing guns only spend, on average, about six months – or about half of their sentence – in jail.

But McCarthy, Chicago Mayor Rahm Emanuel, Cook County State’s Attorney Anita Alvarez and local law enforcement say that needs to change and stricter penalties need to be enforced for the more than 6,000 guns confiscated each year in order to reduce bloodshed in the city.

Currently, illegal gun possession in Chicago warrants a mandatory minimum sentence of one year, but most of those convicted are released after six months due, in part, to day-for-day good behavior credits.

Under the proposed legislation, the same offense would result in a minimum three-year sentence, with no day-for-day good behavior credits, and convicts would be required to serve at least 85 percent of their sentence. In other words, they must serve a full 930 days versus the current 180-day average.

And according to authorities, such requirements should have a significant reduction in the city’s shootings and subsequent deaths.

“One hundred and sixty-nine people involved as offenders or victims in last year’s murders or shootings would instead have been behind bars,” McCarthy pointed out.

While the legislation already passed the state Senate last year, it came to a standstill in the House, but efforts are once again renewed to get it passed.

However, although it may seem like a good solution for a city which saw 45 shot over Easter weekend, six of which were children, and an annual murder rate well into the triple digits, the city still faces some challenges with the legislation, namely an estimated $780 million needed for additional incarceration fees from a state that’s already in financial ruin.

Nonetheless, Emanuel also blames more than just legislation and financial resources for the ever-growing violence and insisted for “adults around the city to instill the right values in their children and to stand up for the safety of their neighborhoods.”

“Every child deserves a childhood, regardless of where they live. But to do that, our city and community, the neighborhoods that make up this city, cannot live by a code of silence. They have to live by a moral code,” Emanuel added.