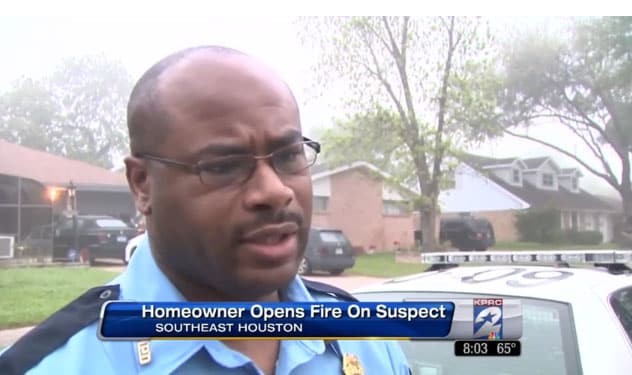 Sgt. Baron Glover of the Houston Police Department said that it was fortunate the homeowner was armed and able to protect himself and his wife. (Photo credit: Click 2 Houston)

A 20-year-old man is fighting for his life after being shot twice by a Houston homeowner during what was believed to be a failed burglary attempt early Sunday morning.

Just before 5:00 a.m. the homeowner and his wife were awakened when they heard a loud banging noise at the front door as the suspect was apparently trying to kick in the door but was unable, local media reported.

Meanwhile, the homeowner, whose name has not been released, grabbed his gun while his wife called 911.

The suspect, whose name is also being withheld, then walked around the house where he successfully kicked in the back door, but once inside the home he was confronted by the 56-year-old homeowner and his .357.

When police arrived a short time later, the suspect was transported to a local hospital for emergency medical treatment and as of Monday afternoon, the suspect remained in serious condition. His injuries are believed to be life-threatening.

Sgt. Baron Glover of the Houston Police Department confirmed that the suspect did not have a weapon after all, but nonetheless it appeared that the homeowner was still well within his legal rights to protect himself, his wife and his home.

“Usually when people kick in the door and come in on you in a home invasion they’re not just there to steal, they’re there to hurt you a little bit,” Glover told reporters.

Fortunately, neither the homeowner nor his wife were injured during the incident.