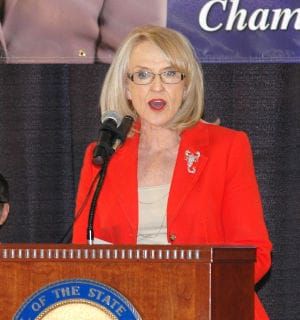 Gov. Jan Brewer vetoed two pro-gun bills Tuesday that were sent to her desk by the Arizona Legislature last week.

These bills included a controversial measure that would allow Arizona concealed-carry permit holders to enter most buildings regardless of ‘no guns’ signs as well as a second that would strengthen the state’s preemption laws.

“I am a strong proponent of the Second Amendment and I have signed into law numerous pieces of legislation to advance and protect gun rights,’’ Brewer said in her veto letter of HB 2339, the concealed carry enhancement legislation. “However, I cannot support this measure in its proposed form.’’

The Republican governor cited unforeseen and un-budgeted expenses that would be placed on local city and county governments to provide guards on doors of government buildings as her reason to scrap the bill. House Bill 2339 had only narrowly passed the Legislature with a 16-12 vote and Brewer had vetoed similar legislation in both 2012 and 2011.

The second measure inked by Brewer’s veto pen was HB 2517. This piece of legislation would have allowed the state to give a $5,000 fine to city and county officials who enacted stricter gun regulations than what the state has issued. Besides the fine, it would have also permitted the state to sue individual local lawmakers who establish such an ordinance.

“A person or an organization who perceives an ordinance is illegal already may seek remedies through the legal system,’’ Brewer wrote in her veto letter on HB 2517. Again, citing expense, she wrote that she could not support the legislation. Further, she found language in the bill “vague and punitive.”

Further, Brewer vetoed Senate Bill 1211, which would have allowed livestock owners to kill a Mexican gray wolf if one was caught attacking livestock or a person, stating the bill is, “unnecessary and conflicts with federal law.”

Pro-gun control groups were quick to seize the news of these executive actions as a victory.

“Without a veto on HB 2339, loaded, hidden guns would have been forced into Arizona’s public buildings and at public events unless officials found a way to pay for extra, costly security measures,” said Kara Pelletier, Arizona State Chapter Lead for Moms Demand Action.

“Forcing public officials to choose between public safety and imposing more taxes upon their communities was the wrong thing to do—and we’re glad Governor Brewer listened to what we had to say,” she continued.

John Wentling, lobbyist for the ACDL, said the veto of HB 2339 is in some ways a surprise.

He said after Brewer vetoed a similar bill in 2012, that the new legislation was revised to make it more acceptable, including limiting the right to bring guns into public buildings to only the approximately 200,000 Arizonans who have state-issued permits to carry a concealed weapon.

The Governor, however, did approve other bills of interest. Among the more than sixty bills signed by Brewer this week include HB 2103, which allows current military personnel or those who have been honorably discharged to apply for a state concealed weapons permit starting at age 19 instead of the current age requirement of 21.