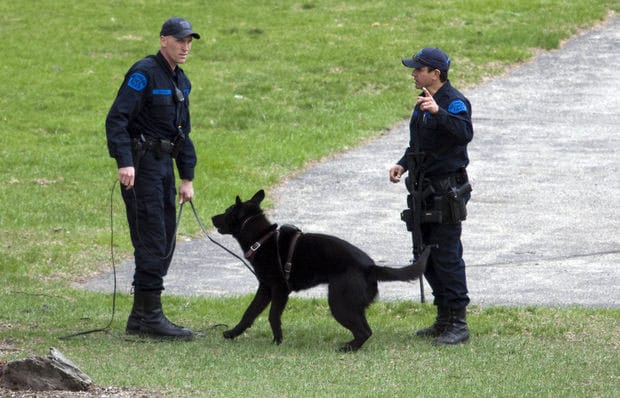 K-9 units were called in to help search for the suspects, but were unsuccessful. (Photo credit: M Live)

An attempted robbery of a Plainfield Township, Michigan, jewelry store Tuesday afternoon was thwarted when the store owner and his son opened fire on four masked suspects, at least one of which was armed.

This was the second time in less than four years that the store had been targeted for a robbery, only this time the owners were prepared to fight back.

According to local media, the same store was robbed back in 2010, prompting the owner, Paul Medawar, and his son, David, to buy handguns and learn to use them.

“When it first happened in 2010, we felt very helpless; victims of this horrible, brazen crime,” David said. “So your life changes, and we said we’re going to get trained, we’re going to learn to protect ourselves so we’re not a victim anymore.”

The men knew they were about to be robbed when they saw the four suspects outside of the store, so they ordered all of the employees to a back room where it was safe. All but one made it to safety and that employee was soon being held at gunpoint by one of the suspects.

One of the suspects attempted to use a hammer to break into a glass case containing Rolex watches, but was unsuccessful.

But as the suspects made their way into the back room, they were first met with a warning.

“We told them, ‘We have guns, we will shoot you. Leave, leave we will shoot you, leave. And they did not leave,” David later told reporters, also stating that they could see the suspect’s gun before actually seeing him.

“I don’t know if they thought we were bluffing,” he said. “They could definitely hear us.”
But they weren’t bluffing and as the suspect entered the room, the two men opened fired, sending all four suspects fleeing.

Authorities did not say how many shots were fired, but blood was found at the scene and they believe that at least one of the suspects was shot.

Police searched the area for the suspects using a helicopter and K-9 units, but their trail went cold. Local hospitals were also contacted and asked to be told of anyone seeking treatment for a gunshot wound. However, police have yet to be notified of any such occurrence and all four suspects currently remain at large.

Although shaken up over the ordeal, none of the employees were injured.

No charges are expected to be filed against either the store owner or his son, who are believed to have acted within the confines of the law, which allows the use of deadly force to protect yourself or others.