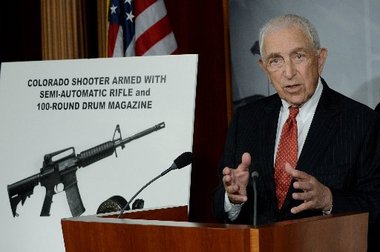 The late U.S. Sen. Frank Lautenberg (D-NJ) championed several anti-gun bills, one of which, named after him, is centered around domestic violence and guns. (Photo credit: Michael Reynolds/EPA)

In recent years, the National Rifle Association has been seen by many to find common ground on domestic violence legislation that involves guns.

This comes after a series of bills made it through state legislatures nationwide over the past decade that have gone without debate from the gun rights group. The latest of these is in Washington state where HB1840, which at first faced public opposition from the NRA, found quiet support following modifications that would “conform with the firearm protections in the constitution of the state of Washington,” The Seattle Times reports.

“The NRA has been really good to work with on this particular issue,” said Minnesota state Rep. Dan Schoen (D), who sponsored an anti-domestic violence bill. “It pains me to say, but they have been.”

Schoen reached out to the 5-million member group following movement of domestic violence legislation in neighboring Wisconsin. The NRA was very vocal in its opposition to measures that would require an individual who is subject to a protective order to appear before a court and reveal all the firearms that he or she owns or possesses. However, a later version with somewhat muted language on gun surrenders was signed into law there last week.

This phenomenon is being seen not just in moderate states but in deep red ones as well. In Louisiana last month, the NRA came to an agreement to neither oppose nor support a domestic violence gun bill in that state.

These state laws are an outgrowth of federal ones championed by the former U.S. Sen. Frank Lautenberg whose controversial 1996 Domestic Violence Offender Gun Ban, more commonly known as the “Lautenberg Amendment,” bars anyone convicted of domestic violence from possessing a gun. A case recently decided in the Supreme Court strengthened this already existing law.

This is not to say that the NRA is no longer involved in taking a stand on gun surrenders and confiscations under the aegis of domestic violence legislation. In March they publicly called a Rhode Island bill, “flawed because it lowers the bar to misdemeanor offenses.” The group is also highlighting the fight against Vermont’s confiscatory gun bill that would allow local law enforcement to store the guns of alleged domestic violence subjects.

Still, with the group seeming to bend on some issues, those with the polar opposite of the NRA’s agenda are seizing domestic violence as a rallying point in the war over gun rights.

Americans for Responsible Solutions, the political action group founded by former Rep. Gabby Giffords and her husband, have made an open call to Congress to further strengthen the Lautenberg Amendment in recent months.

Following the lead of ARS and others, like Michael Bloomberg’s Everytown organization, sees the writing on the wall for taking on the NRA over the issue.

“This is not your grandfather’s NRA,” Erika Soto Lamb, Communications Director for Everytown, said. “We’re going to start to talk about the ways gun violence affects everyday Americans, including domestic violence, suicide, and child access to guns.”