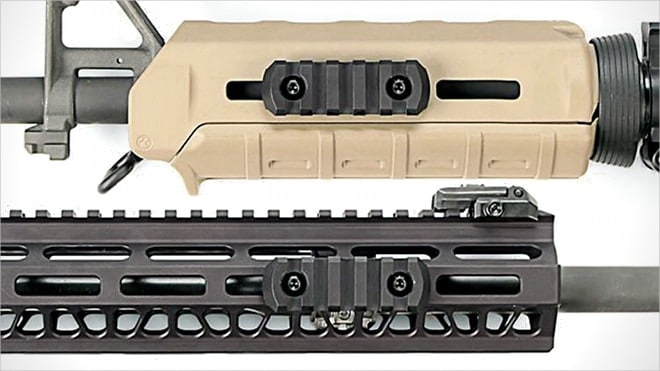 Magpul is releasing a free to use modular accessory mounting standard called M-Lok. M-Lock is allows users to directly attach accessories to their guns without having to remove parts to mount them from behind, without trading off stability in favor of ease-of-use.

M-Lok will let users quickly and solidly mount Picatinny rail segments for use with Picatinny accessories as well as directly mount M-Lok-specific accessories like lights and foregrips.

Although technically very different, the system is functionally similar to Vltor’s open-source KeyMod standard, which has been widely-adopted by manufacturers of tactical accessories. The new standard will replace existing MOE modular accessories. While M-Lok accessories will not be compatible with the older MOE handguards, MOE accessories can be used with M-Lok handguards with a small adapter.

Magpul never officially released a MOE standard even though a handful of manufacturers make MOE-compatible accessories and mounts. M-Lok will replace MOE and make things official.

While some might argue that the M-Lok standard is in direct competition with KeyMod, it’s likely that as time goes by it will simply be looked on as an alternative. Magpul has a lot of clout in the industry but KeyMod has a head start and a solid foothold and won’t be going anywhere soon.

Philosophically the two standards differ. While both are free, the M-Lok system is licensed while KeyMod is completely open-source, which means that manufacturers are not only able to use it for free, they can modify and adapt the system for their purposes; for some companies that may mean the difference between supporting one standard or the other.

The benefits of using a licensed standard is that Magpul can ensure that products bearing the M-Lok brand are up to Magpul’s quality code.

The main downside of M-Lok is that M-Lok accessories will not work with existing MOE handguards. Users who want to adopt the new standard will have to replace existing handguards or modify them. Magpul will begin to phase out the old standard immediately.

“M-LOK will immediately replace MOE slots on all new products introduced by Magpul Industries,” explains Magpul in their announcement (.pdf). “The first of these will be the new MOE SL shown at the 2014 NRA Annual Meeting and Exhibits April 25-27.

“All current Magpul items featuring the MOE slot system will be systematically converted to the M-LOK standard during 2014. Both MOE and M-Lok versions of accessories will be offered concurrently for at least 18 months before MOE  accessories are phased out. All existing MOE AR15 hand guards and shotgun forends will be redesigned to use the new M-Lok in 2014.” We still expect companies to continue supporting both standards just to cater to customer preference. Open-sourced versus licensed standards aside, the two systems are aesthetically different and some people will pick one over the other based on looks alone.

One company that’s already folding the M-Lok system into their designs is Geissele with their upcoming Super Modular Rail MK8, a free-floating AR-15 handguard with M-Lok slots at the three-, six- and nine-o’clock positions. Other rails and accessories are sure to follow shortly, from Geissele as well as other accessory makers.

We’re definitely looking forward to seeing what’s in the future for the M-Lok world of handguards and accessories.

For more information, head over to the Magpul website and for news and updates check out their Facebook page.