Louisiana bill to ban guns around children defeated in committee 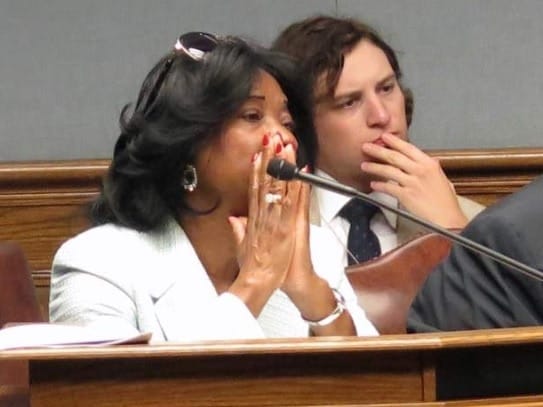 Rep. Barbara Norton (D-Shreveport) looks on as her bill is criticized in committee Wednesday. (Photo credit: The Advocate/Michelle Millholland)

A bill that would have made it a crime to expose a gun to a child in Louisiana was soundly defeated 8-4 in a House committee vote Wednesday.

The legislation would have made it illegal to intentionally expose children under age ten to a firearm that was not locked in a container or secured by a locking device.

Introduced earlier this month, HB 1189 was crushed during hearing of the House Administration of Criminal Justice Committee with bipartisan opposition.

“I’m not asking you to give your gun up … I’m only asking you to protect those children,” said Rep. Barbara Norton, (D-Shreveport), the bill’s sponsor to the committee. “I hope one day in the state of Louisiana that we put children first. I am hoping and praying.”

Norton’s bill would create the crime of “unlawful exposure of unsafe firearms to children” in Louisiana which would be defined at the intentional or criminally negligent exposure by anyone who is 17 years of age or older to any child under the age of 10 years to a firearm which is not secured or rendered inoperable.

The only exceptions to the 2-page bill would be while engaged in hunting, target shooting, or a hunter’s education course. Violations of the law would have incurred a $300-500 fine and up to six months in jail, or both.

Among those who testified Wednesday against the bill was Jay Hunt III, Director of the Louisiana Shooting Association (LSA), who called the measure, “laudable, but poorly written.”

“HB 1189 would have made it a crime to expose a child under the age of 11 to a gun. That’s right, if you 8-year old were to see your gun, you would have committed a crime,” the group posted on their Facebook page. “The bill was a complete disaster.”

Also in opposition was the National Rifle Association who vowed to continue to reduce firearm accidents among children through firearms safety programs such as their Eddie Eagle program, stating, “This would do more to make Louisiana children safer than ill-conceived legislation such as HB 1189.”

Firearms safety and children in recent months has become the new rallying call for gun-control organizations such as States United and Bloomberg’s Everytown. This coincides with the passage of laws such as one in Iowa that arbitrarily sets age limits on youth and firearms, regardless of the reason.

With Wednesday’s vote, Louisiana’s HB 1189 is effectively dead for this session.