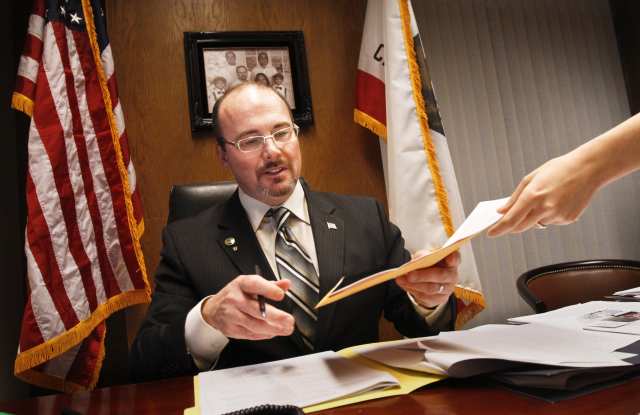 A sweeping handgun carry license reform bill introduced into the state Assembly could make California a ‘shall-issue’ state if adopted.

The bill, sponsored by Assemblyman Tim Donnelly, (R), would be the biggest change to the Golden state’s gun laws since 1923.

It follows in the wake of the groundbreaking Peruta decision by a federal appeals court which found San Diego County’s ‘may-issue’ standard of granting concealed-carry permits to be unduly harsh.

“AB 1563 fixes California’s handgun carry license system by implementing a fair, efficient, and effective framework that eliminates the burden on local law enforcement while still requiring background checks and that licensees be law-abiding people,” said Donnelly of the bill.

“What we’re doing is unwinding decades of unconstitutional laws and replacing them with a framework that respects our Second Amendment rights, bringing us in line with dozens of other states.”

Donnelly’s bill, AB 1563, is a multi-tiered attack on the California stringent concealed carry laws. Proposing to scrap the current chapter of the state’s penal code on carry licenses, it would replace it with a ‘shall-issue’ standard that accepts ‘self-defense’ as sufficient cause for a law-abiding gun owner to request a license.

The bill would strike ‘may issue’ from the state’s Penal Code, and add self defense as a reason for good cause.

Currently, the 56,000 permit holders in the state must satisfy local requirements that vary widely from jurisdiction to jurisdiction.

For instance, Orange County is currently accepting permit applications under the less strict ‘shall-issue’ requirements whereas many others, including San Fransisco, are not.

The outlook for getting the reformative measure through the Democrat-controlled state Legislature is bleak according to analysts.

Nevertheless, it has the strong backing of state gun-rights organizations.

“Our current system, nearly a century old, is riddled with discretionary abuse and practices that chill the exercise of rights our Founders knew to pre-exist government itself,” said Brandon Combs, director of the California Association of Federal Firearms Licensees (CAL-FFL), who helped craft the bill.

“It’s time for California to go mainstream and join the 41 other states that have a fair and objective system,” he added.

The bill is the latest assault on the practice of ‘may-issue’ around the country. Recently restrictive ‘may-issue’ states such as Hawaii have seen their legislation riddled by federal courts. Friday the Supreme Court will hear the Drake case in conference, which challenges New Jersey’s practice of limiting handgun permits except under grave circumstances.

Donnelly’s bill has been referred to the Assembly Committee on Public Safety and will be heard in conference April 29 at the State Capitol.