Shannon Watts: 'We are in no way anti-gun' (VIDEO) 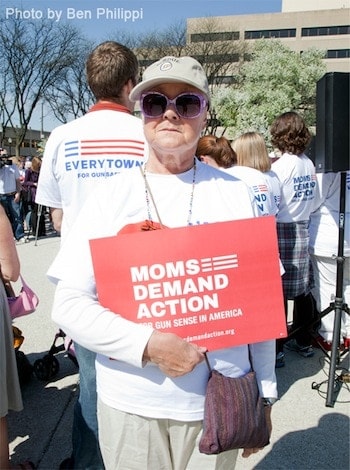 Shannon Watts, the founder of Moms Demand Action for Gun Sense in America, has a message for gun owners.

“We are in no way anti-gun, but we are about the responsibilities that go along with the right of the Second Amendment and that includes things like background checks,” she told Guns.com in an exclusive interview following a Friday press event in Indianapolis.

Watts, who along with former New York City mayor Michael Bloomberg runs Everytown for Gun Safety, believes that the ideological divide between gun-rights advocates and gun owners is not nearly as wide as the National Rifle Association claims it is.

“We know that the vast majority of NRA members are good, sensible people, as open to common-sense policies that will save lives as anyone,” Watts said during her brief address announcing the release of a detailed report called, “Not Your Grandparents’ NRA.”

“We’re not here to challenge the many law-abiding and responsible gun owners gathered here this weekend. In fact, many of us are also responsible gun owners,” she continued. “Rather, we’re united here to tell the NRA’s leadership and the Washington gun lobby to stop misrepresenting the facts.”

Here are several of the claims Everytown makes against the gun lobby in the report:

– Fighting for the rights of felons and terror suspects to buy and own firearms and explosives;
– Campaigning to put guns in places like bars, despite the documented dangers of mixing guns and alcohol;
– Promoting gag orders to block pediatricians and military commanders from discussing gun safety with parents and service members at risk for suicide;
– Handcuffing law enforcement and impeding their efforts to fight gun crime by sabotaging the introduction of proven, innovative technology; and
– Hobbling communities beset by gun violence by thwarting their efforts to tailor gun laws to local conditions.

Joined by a coalition of gun-control advocates, faith leaders, politicians and victims of gun violence, Everytown is conducting a weekend-long counter protest against the gun lobby’s annual meeting and exhibits, which is also in downtown Indy at the convention center.

Apart from enhancing laws dealing with the safe storage of firearms and suicide prevention, Everytown’s main legislative objective is to enact a federal law requiring universal background checks for gun transfers made between private parties. To this end, the group contends there is widespread public support for such measure.

“For far too long, the side that supports sensible reforms has been silenced and distorted,” Watts said. “It’s no longer possible to ignore the truth that 86 Americans are killed everyday with guns.”

Given that Bloomberg just committed to putting $50 million into Everytown to see that it actualizes its objectives, it goes without saying that the NRA will certainly have its hands full in 2014.