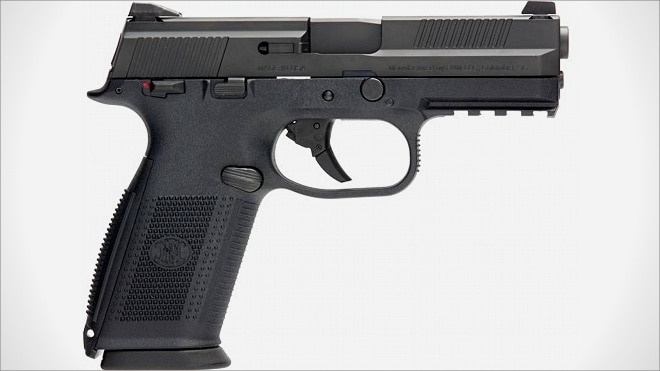 FNH-USA is cutting the price of their all-black models of FNS pistols by $100. The decision to lower the prices of FNS pistols makes them even more appealing and very approachable. The FNS is FNH-USA’s latest striker-fired polymer pistol.

The FNS series, introduced mid-2012, has seen a fair share of success in the polymer pistol market despite being a recent entry. While a premium handgun that, in general, cost a little more than its competition, the FNS stands out for its strong set of features and above-average construction.

“We are pleased that the FNS line has been so popular,” said Mark Cherpes, FNH-USA president, in a company press release.

“Because our sales volume was so high in 2013, we were able to reduce our production costs enough to realize a savings we are now passing down to our customers. We hope consumers will take advantage of this new, lower price and choose an FNS when they are shopping for a new pistol.”

“Since launching the FNS line of striker-fired pistols in 2012, it has been exciting to see how well-received they have been by all firearms enthusiasts no matter if they are looking for a competition pistol or a reliable handgun for home defense,” added Ken Pfau, senior vice president of sales.  “We believe their popularity is due in large part to the fact that it is one of the only fully-ambidextrous striker-fired pistols on the market today and its low bore axis significantly reduces recoil so it’s a much more enjoyable and controlled shooting experience.”

Unlike most pistols the FNS is fully-ambidextrous, with a full set of controls on both sides of the gun. This makes it a go-to pistol for lefties and a strong option for law enforcement agencies who want a gun that’s more universal.

The FNS has more aggressive texturing than just about every other service pistol on the market, ensuring a positive grip in any circumstances. Combined with interchangeable backstraps makes the FNS an excellent all-purpose pistol, from home defense, to duty use and competition shooting.

Additionally the pistol has a loaded chamber indicator on the extractor and a passive trigger safety. The gun quickly developed a solid reputation for its quality trigger, which is a two-stage design with a short, light take-up and a positive break and reset. 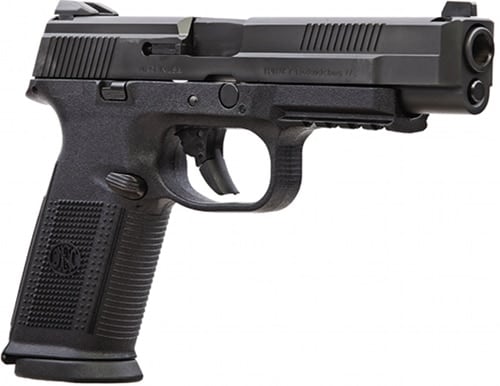 Initially launched in 9mm and .40 S&W as a four-inch service pistol with an ambidextrous manual safety, FNH-USA has followed up with models without the manual safety as well as “Long Slide” models with full-size five-inch barrels.

The FNS is offered with and without night sights and each pistol comes with three magazines. FNS pistols chambered for 9mm have a capacity of 17+1 and 14+1 when chambered for .40. Reduced-capacity 10-round magazines are available for restricted markets.

Depending on the configuration the FNS had an MSRP of $699 or $749, with models sporting night sights or long slides fetching a premium over the base models. Now they are priced at $599 and $649, respectively.

Real-world prices, as usual, are going to be even less than that, like right around $500, making the FNS far more competitive in the service pistol market.

The FNS, in all its configurations, is a very nice handgun. About the only thing that has held it back has been its above-average price tag. With this significant price drop, there’s really no reason not to recommend the FNS.