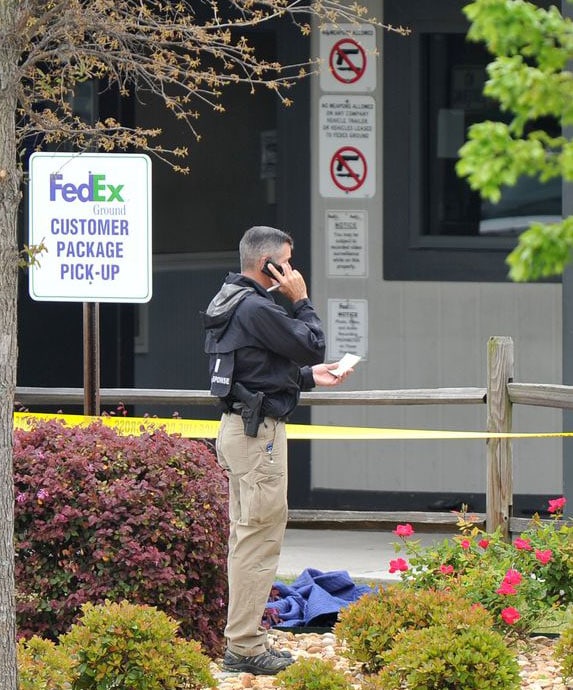 Though a city ordinance requires every household to have a gun, the FedEx facility was a gun-free zone. The “no weapons allowed” signs posted on the doors were obviously ignored by the suspect. (Photo credit: The Atlanta Journal-Constitution)

Six people were wounded when a gunman opened fire at a FedEx facility early this morning in Kennesaw, Georgia, a city that has unusual gun laws in that it requires every household to have a firearm.

According to local sources, the shooting happened about 5:45 a.m. Police found the suspect, who has only been identified as a package handler that worked at the facility, dead a little before 9 a.m. in a loading bay from what appeared to be a self-inflicted gunshot wound. Police do not have a motive, but they do believe the suspect acted alone.

One witness, Liza Aiken, who also worked with the suspect, described him as wearing all black, carrying a large knife and a gun with bullets strapped across his chest, “Like Rambo.” She said, “He looked like he was heading into war.” 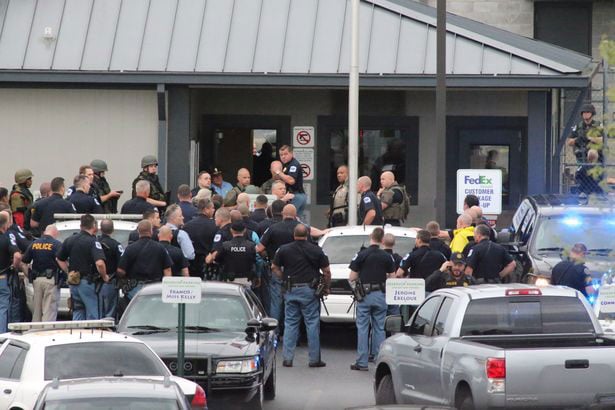 Hundreds of law enforcement from surrounding areas were called in to assist with the chaos that followed the early morning shooting. (Photo credit: The Atlanta Journal-Constitution)

Aiken also said he was armed with an “assault rifle,” although authorities said that the damage was consistent with that of a shotgun, which was recovered from the scene. Some sources also said that a pistol was found, but, again, no assault rifle.

Aiken, who had an altercation with the suspect just last week, ran away immediately once she saw how he was dressed and armed. He never saw her, but she believes she would not have escaped unharmed if he had.

However, six people were shot, all multiple times. Three remain in critical condition. A seventh person was also said to be injured while trying to escape from the gunman, but he was not shot.

Hundreds of law enforcement from the surrounding areas were called in to assist in searching the half million square foot facility.

Just after 7 a.m., FedEx released a statement, which said, “FedEx is aware of the situation. Our primary concern is the safety and well-being of our team members, first responders and others affected. FedEx is cooperating with authorities.”

Two hours later, the company added, “Our thoughts and prayers are with those affected, and with their families and friends. We are grateful for the assistance of law enforcement. The situation is now stabilized and we are focused on the needs of our team members and cooperating with the law enforcement investigation of this tragedy.”

Kennesaw is famously pro-gun, something gun control groups have already pounced on. In 1982, the city council passed an ordinance to “protect the safety, security and general welfare of the city and its inhabitants.” However, the ordinance was more of a political statement than anything else — a response to a law passed earlier that same year prohibiting firearms in the city of Morton Grove, Illinois. In fact, the Kennesaw ordinance has no set penalties for not owning a firearm and, of course, nobody has ever been prosecuted for not abiding by the famous law.

“In 1982 this was a rural community of about 5,000 people. The whole town was very conservative and about 95 percent of people owned guns anyway, so it was a very symbolic law,” president of the Kennesaw Historical Society, Robert Jones, told FT Magazine in 2010.

However, symbolic or not, the law did little to protect those in the gun-free FedEx facility Tuesday morning.

The investigation, which will no doubt be a lengthy process, remains underway.

“I’ve worked here for seven years, and never, ever dreamed that something like this was going to happen,” Aiken said.