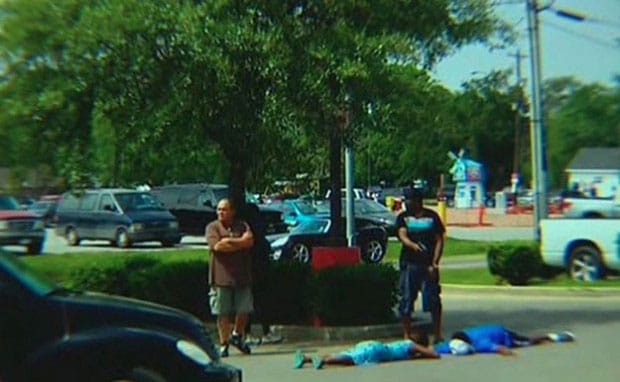 Nobody was injured, but it’s unclear if the two suspects needed to change their underpants after being pulled out of their vehicle at gunpoint. (Photo credit: KHOU)

A trip with her two daughters to a Houston Family Dollar turned into a nightmare for one woman who became the target of a couple of purse snatching suspects – before an armed citizen intervened and came to her aid, that is.

The 30-year-old mother, who has not been identified, was in the parking lot when the attempted crime occurred, KHOU reports. The entire incident was captured on the store’s video surveillance cameras and the store manager, Brenda Vasquez, witnessed the incident as well.

“It happened so fast,” Vasquez told reporters. “This lady opens her car door, grabs the woman’s purse and they reverse. While they’re trying to reverse, the lady is holding on to her purse still, chasing them all the way to the middle.”

But before the car is able to take off, a good Samaritan who just happened to be sitting nearby in his car – and legally armed with a gun – came to help the would-be victim.

“And that good Samaritan came out, drew his weapon and scared them. And that’s when he pulled them out of the car,” Vasquez added.

The armed citizen, who police have not publicly identified because he is considered a witness in the case, made the two suspects lay face down on the ground with his gun pointed at them until police arrived a few minutes later.

Afterwards, the man went into the store to purchase some candy for his kids, then drove away.

John Cannon, spokesman for the Houston Police Department, told TheBlaze that “the citizen did what he thought was right at the time. In some instances, witnesses do that and other times they play it safer and just get good descriptions.”

However, the good Samaritan did not hesitate to get involved in the situation.

“The guy is something else,” said Vasquez. “He’s a hero.” A statement which the mother agreed with.