In a world, where true warriors are too few, and the bad guys are too many, a world where Chayos runs rampant, there is need for the return of a different kind of hero, from a purer time. An ’80s action hero.

And that hero is Mack Luster. A fictional character from the minds of Ryan McCann and Jared Drake, Luster was created for the 2008 Zach Galifianakis feature film, “Visioneers.” Not willing to let Luster fade into obscurity, McCann and Drake have teamed up again, with the help of Drake’s brother Brandon, who penned the script, to bring Luster back to life with a full-length feature film.

Mack Luster is the anti-Hollywood reboot. Everyone knows what happens when big studios try to breathe new life into retro projects; not willing to let solid ’80s nostalgia go the way of “The Man of Steel” or “Total Recall,” the Mack Luster team have created their own throwback action star to make a modern movie of their own with that classic action feel.

In order to do that, they’re using Kickstarter. The project is well under way but ever cent helps. We sat down with McCann, Luster’s creator and portrayer. 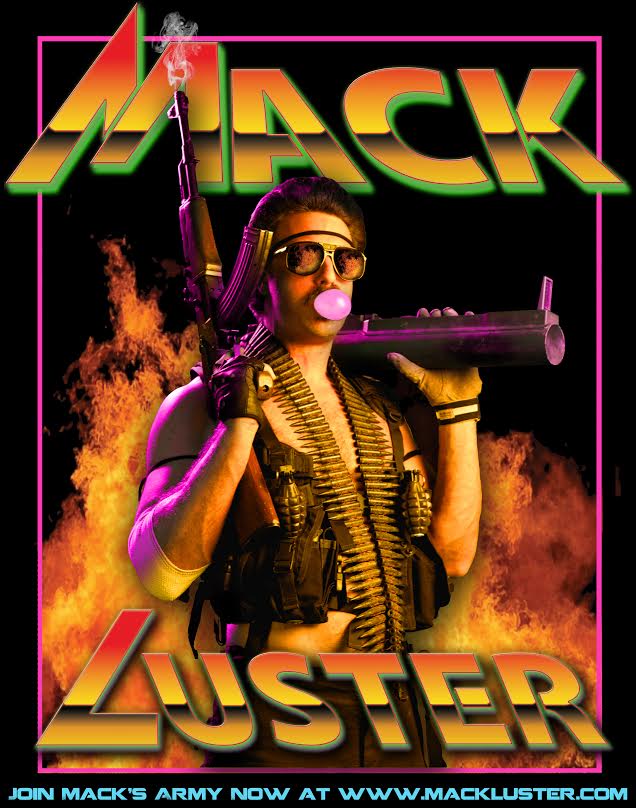 Guns.com: So you’re using Kickstarter to bring Mack Luster to life. Self-funding a movie frees you up to make the movie exactly how you want it. How are you going to capitalize on that freedom?

Ryan McCann: By doing whatever we want! This movie would never get financed by Hollywood because it is un-politically correct to support an action movie that reflects the ‘80s in any sort of positive light. But, we hope there is an audience that feels the same way we do — that we shouldn’t apologize for the ‘80s and for being a kick-ass country that stands up for right and wrong.

There really is a sense by Hollywood gatekeepers that it is cool to bag on America, and the target is often aimed at action heroes. We’re tired of it. Both the director and I are married to Euros, so we know both sides of the coin. There is a lot to love about Europe, but America is the greatest country on the planet.

Guns.com: Without a studio backing you, what limitations do you expect to have to work around? For instance, marketing and distribution, licensing, and locations?

Ryan McCann: Visibility is a big one. Studios have marketing power and ad budgets. We don’t. Our hope is that we build a big enough audience organically through Kickstarter that we can service our audience without a studio. Basically, we’re trying to cut out the need for Hollywood middlemen. But, time will tell if it works or not. If anyone wants to see us make this happen, please donate now!

Guns.com:  How much do you have complete already, or is the project still fluid, flexible?

Ryan McCann: We have a script. Locations. A great cast lining up (with some recognizable faces). We’ve done test shoots. We’ve budgeted, scheduled, and are ready to jump into production. But we don’t have the financing. That is the one piece that is missing. We need the dough — and your readers can be the ones who bridge this gap.

We have some great deals being offered, including a $40 package that includes a copy of the finished movie, special thanks credit in final film, Mack Luster cast/crew sunglasses, the shooting script, production diary, and exclusive backer updates.

(You can find all of the perks for supporting the project here.) 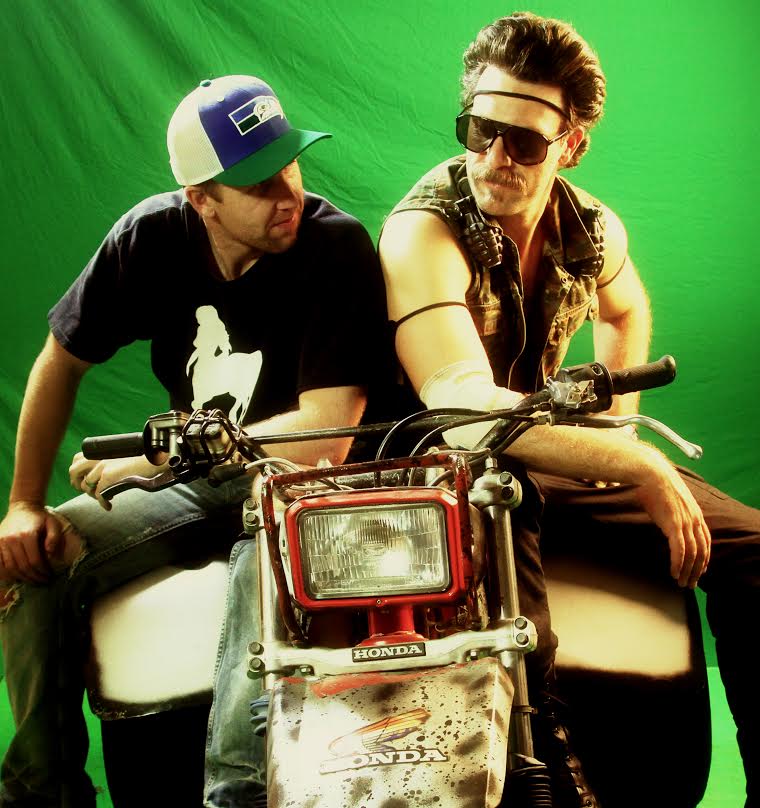 Guns.com:  How much of a backstory do you have for Luster? Was he at any point in his childhood raised by wolves, or some other apex predator?

Ryan McCann: Huge backstory. Luster is a hero, but he’s also just man. Like you, me, your readers. Giving him layers and depth is what we believe makes him a real hero, like John Rambo. Who, regardless of what anyone in Hollywood wants to believe about ‘80s action stars, was an awesomely complex character.

Guns.com: What sort of plans do you have to score the movie? Will there be a soundtrack? If you had no restrictions, like, a perfect-world scenario, who would make up Mack Luster’s soundtrack?

Ryan McCann: We definitely want an original soundtrack. A good friend of ours, Tara Novick, created the Temptation song we use in our Kickstarter video, and we love it. If we could get Die Antwoord  to travel back to 1984 and collaborate with Motley Crue that would be ideal.

Guns.com:  What will you use for special effects? Do you expect to use a lot of digital stuff, stuntmen, or a little of both?

Ryan McCann: It will definitely be a combination of both.

Guns.com:  There’s a lot of greatness in ’80s movies but there are also some pitfalls. There’s good camp and bad camp. What stuff from ’80s movies would you try to avoid? For instance, Will Mack Luster have a kiddo sidekick?

Ryan McCann: No kiddo sidekick but he does have a place in his heart for his Honda 200X 3-wheeler named Sharleen. Examples of bad camp: Last Action Hero. Examples of good camp: Commando, Rambo.

Guns.com: There are a lot of iconic guns from the ’80s, too. Besides Luster’s Uzi, what guns and other weapons would you like to have in the film?

Ryan McCann: The Uzi is so great because you can operate with one hand and use the other to pull a sick grab as you 1080 off a massive cliff in the Alps to avoid an avalanche and stop Chayos.

Ryan McCann: A BMX race would be RAD! Get it? But seriously it would. We want to use elements from our world as well as the 80s so if we can raise enough money we would love to have a race/chase scene with water jetpacks. It would have an ’80s feel but with the ridiculous awesomeness of these: 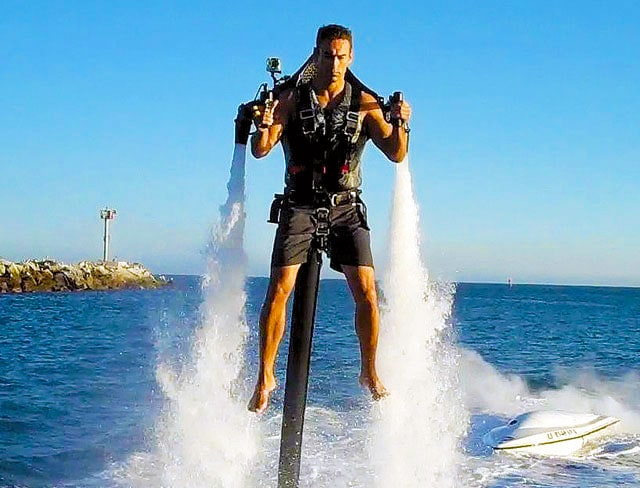 A water jetpack could quite possibly be in the film.

Guns.com:  How do you go about making sure the movie is period-correct? Cars and clothes are the tip of the iceberg, really. Set stuff, backgrounds and all that have changed a lot over the years. Is this a big hurdle or is this the easy part?

Ryan McCann: We’re creating our own skewed reality of the 1980s meets present day. This gives us the freedom to define the world however we want. Luster’s garage, for example, has a shiny new 2014 Lambo next to a 1980s A-Team styled van next to his 1984 three-wheeler. By not being bound by the reality of a true period piece, we can take the best of the ‘80s and the best of today and put them in one place together. The key is to define rules so that the world feels consistent. Otherwise you end up with a bunch of mush.

Guns.com: Do you have any desire to bring in some ’80s action stars? Like, would you want a Dolph Lungren cameo? Steven Seagal is always looking for work.

Ryan McCann: [We] would KILL to have any of these guys in the movie and will absolutely be reaching out when the time is right. If you, or any of the readers out there, have any suggestions or ties to any iconic ‘80s figures, please email us at mack@mackluster.com.

Guns.com: If Mack Luster could teach Jean-Claude Van Damme one lesson, what would it be? Is it a judo move, or something more elevated, or spiritual?

Guns.com:  Speaking of judo, will Mack Luster have a signature move?

Ryan McCann: I was just listening to an interview where Arnold was talking about his signature “I’ll be back” line from Terminator. That day of shooting Arnold was insistent to change the line to  “I will be back” but James Cameron refused, saying it has to be the way he wrote it. Neither of them knew it would be what it has become, but Cameron stayed true to his vision and it paid off. So to answer your question, I am sure there will be a signature line or move, but time will tell.

Guns.com: What can we learn from ’80s action heroes today?

Ryan McCann: The biggest thing we can learn from 80s action heroes is that although fighting and violence should be avoided, sometimes you gotta stand up for yourself and kick some ass.

We’d like to thank McCann and his crew for their time and efforts. You’re doing God’s work. If you like what they’re doing and want to know more about the project, head over to MackLuster.com