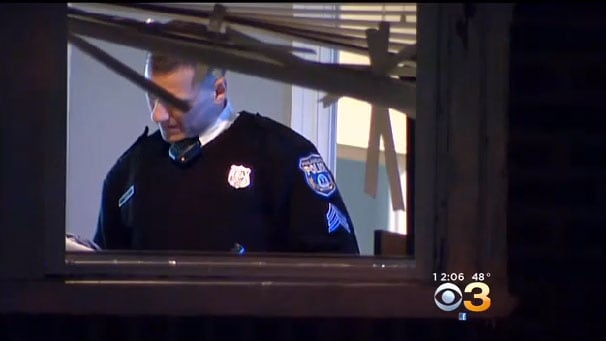 Investigators believe that the intruders made their way into the couple’s home through a broken downstairs window and escaped through the same window once the altercation with the homeowner broke out. (Photo credit: CBS)

A Philadelphia couple interrupted a burglary in progress at their home late Tuesday night and one of the suspects was fatally shot after the homeowner wrestled the suspect’s own gun from him.

A local CBS affiliate reported that the 22-year-old man and his 26-year-old fiancé returned to their home around 10:00 p.m. to find that four or five men had broken in. The men were wearing masks and gloves and at least two of them were armed with guns.

The suspects forced the female resident onto the floor of a second-floor bedroom, where they had been rummaging through the couple’s belongings, and that’s when the tables were quickly turned.

Police later recovered two semi-automatic handguns from the couple’s home, both of which are believed to have been dropped by the other suspects as they ran off.

The suspect who was shot was still in the upstairs bedroom when police arrived and was pronounced dead at the scene. The male resident was rushed to a local hospital, where he now remains in stable condition, his injuries not believed to be life-threatening. Other than being shook up, the female resident was not physically injured during the incident.

Two semi-automatic handguns which may have also been used by the remaining suspects to escape once the altercation with the male broke out.

Authorities also had reason to believe that the suspects drove off in a white van. A van matching the description was found about 10 minutes from the couple’s home and police are working to determine if it’s the same vehicle.

Unfortunately, the couple was unable to give a good description of the remaining suspects, who currently still remain at large.

Although there have been a few recent burglaries in the neighborhood, Philadelphia Police Chief Inspector Scott Small told reporters that it was unusual for the area to experience an incident like this one.

“This is normally a nice, quiet, peaceful neighborhood,” Small said.