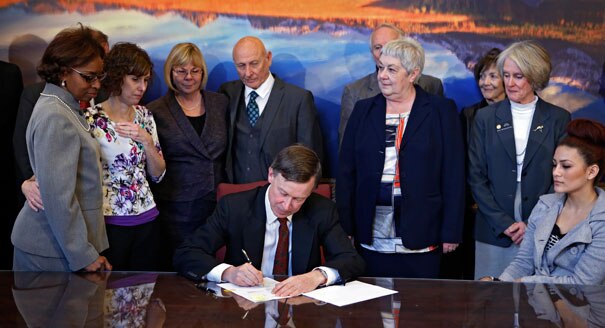 Conducted April 15 – 21, the poll surveyed 1,298 registered voters with a margin of error of  2.7 percentage points. In it, pollsters found that those in favor of the state’s new strict gun control laws are in the minority.

Overall, when asked, “Do you support or oppose the stricter new gun control laws in Colorado?,” pollsters found that 56 percent of respondents answered that they were opposed to them, while 39 percent were in favor of them.

Many view this as a repudiation of the five measures signed into law by Colorado Gov. John Hickenlooper (D) in 2013, which included magazine limits and universal background checks.

A third state lawmaker, state Sen. Evie Hudak (D-Arvada and Westminster) resigned in the face of a recall for also backing the measures.

“A majority of people oppose this no matter, but once the emotion is gone, even more people are opposed to it,” said state Sen. Greg Brophy (R). “Once they reflect longer on these things, they like these gun control proposals less and less.”

On the subject of magazine bans, such as the state’s current 15-round cap on detachable magazines, opinions were close, with 51 percent being opposed and 42 percent in favor. Magazine bans in the Rocky Mountain State are what led Colorado-native Magpul Industries to relocate their operations to Wyoming and Texas within months of taking effect.

Magpul, maker of the well-know PMAG series of magazines, is now involved with a number of Colorado sheriffs in a lawsuit against the state in federal court over the ban as well as other restrictions included in the 2013 law.

Mandatory background checks for all gun buyers, however, found widespread support among respondents, with 85 percent favor them. The current state practice of requiring universal checks on all transfers, even between family members, has drawn fire from many in the gun rights community as being excessive.

In a final sign of increasing concern over school violence, nearly three quarters of respondents said they were in favor of metal detectors at school entrances and a half supported allowing teachers and faculty to carry guns.

To this suggestion, the state’s most powerful teacher’s union disagreed.