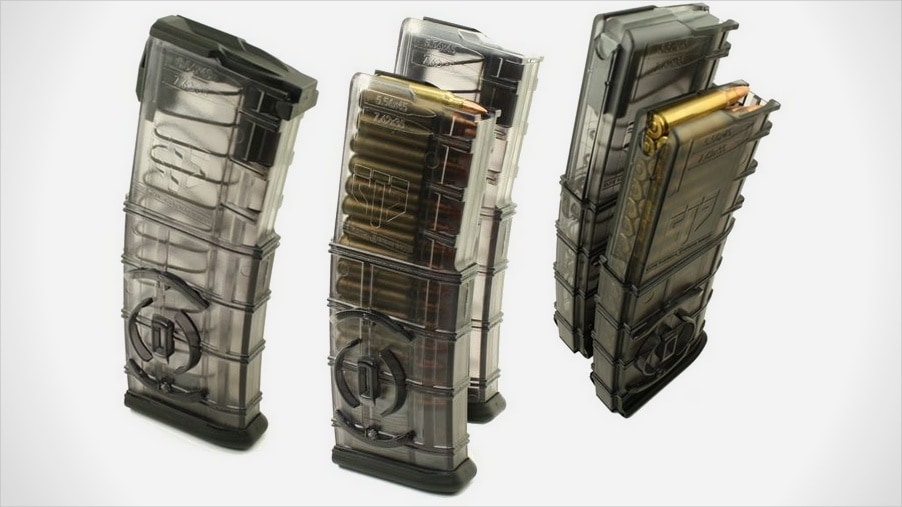 Even though Magpul is coming out with new mags and new styles of accessories, they’re far from the only mag builder in the AR-15 accessory market. No one doubts Magpul’s ability to deliver quality and affordability, but frankly some users simply want something other than PMAGs or GI mags.

Fortunately for them there are plenty of other companies that make polymer AR-15 magazines, companies that deliver mags that are not only aesthetically different but offer clever new functionality as well.

We’ve found two new names that are making interesting new polymer mags that might be part of your next AR build, Hexmag and the Elite Tactical Systems Group, or just ETS. More options are always better but these two companies are doing more than just making Magpul alternatives. These stand out for different reasons.

Hexmag currently makes one product, the HX30-AR, a stylized 30-round magazine for ARs and other rifles that use AR magazines chambered for 5.56 NATO/.223 Remington and 300 AAC Blackout.

At first blush it looks like a standard black poly magazine with a hexagonal ridges for strength. What makes it different than other magazines is remarkably simple — a “why didn’t I think of that” upgrade — they have different colored followers and floor plates.

While normal retention plates are invisible, these pop through a hole in the the floorplate to let you know which magazines are which. This might not seem like a big deal at all but if you keep magazines loaded with different ammo types for different rifles it can be the difference between an X and a keyhole, or if you’re a 300 BLK shooter, a bang and a kaboom.

They’re also very affordable at $14.99 for a magazine and $11.99 for a set of four HexID color change kits. They will no doubt look great on any rifle with a honeycomb barrel.

ETS uses a translucent smoke polymer that’s unlike the rest. While there are a few companies that make smoked poly mags, these are built with a soft, flexible polymer. They’re bendy.

Polymers tend to flex a lot more than metal which will bend a little before deforming, and that’s exactly what makes them so resilient. But these take it to a different level. Compared to other magazines they’re practically squishy.

That’s not the only thing neat about the ETS AR-15 mags. They’re available with an optional integral coupler. With the coupler it’s possible to daisy-chain magazines side-by-side for quick access to the next mag for fast reloads. The coupler is offset so that the magazines won’t interfere with case ejection.

They’re available as standard magazines, as well, without the coupler, for people looking for a straight-forward, but still squishy, magazine.

ETS magazines are a little more expensive at $19.95 for the mags with integral couplers and $17.95 for base model mags, but still relatively affordable.

It will be a while before the idea is proven one way or another, but they’re interesting to the point that it would be fun to try them out, even on a limited basis.

So if you’re looking for something a little novel, a lot new and decidedly different, head over to the Hexmag and ETS Group websites. Might find your next favorite AR accessory.