Eric A. Spicer, 44, was charged with using falsified documents to illegally obtain a machine gun from a New York firearms dealer, according to a news release from the Bureau of Alcohol, Tobacco, Firearms and Explosives.

In order to obtain the weapon, Spicer, a former Major with the Greene County Sheriff’s Office, forged his boss’s name, Sheriff Gene Fischer, and claimed the weapon was to be used while on-duty.

Spicer found himself on the ATF’s radar for the machine gun purchase following a controversial shootout earlier this year. Suspicions solidified when agents raided his house in March and they seized the machine gun in question, at which point Spicer lied to agents and said he was a police officer at the Jackson Township Police Department. 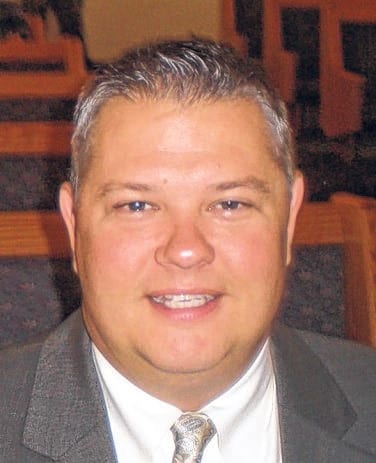 When Eric Spicer ran for the Ohio House, he filed a defamation suit against an anonymous source who emailed an unflattering message. (Photo credit: Dayton Daily News)

He bought the .223-caliber rifle from AmChar Wholesale, Inc. for $1,684.80 in November 2009, and had the weapon delivered to the sheriff’s office, but according to court documents, it was never included in the department’s inventory, WHIO reports.

Court documents also noted that the Jackson Township police chief, who expressed interest in hiring Spicer, requested the rifle be transferred to his department.

While Spicer may have found himself in legal trouble for falsifying records, it was his involvement with a July 2013 shootout in Yellow Springs that led to his termination on March 6, 2014.

Spicer shot and killed a suspect, Paul E. Schenk, who was barricaded inside a residence. While officials investigated the incident, Spicer was placed on paid administrative leave for several months. Upon its findings, Spicer was relieved of his duties, according to WDTN.

“He was placed on leave after the Yellow Springs police standoff ended in the death of Paul E. Schenk, a resident, who fired more than 100 shots at law enforcement officers on July 30,” Fischer said.

“I’m saddened by the events,” Fischer said. “We have cooperated with the ATF and will continue to do so.”

Spicer is scheduled to be arraigned May 9 in U.S. District Court. If convicted of all counts he faces up to 65 years behind bars.