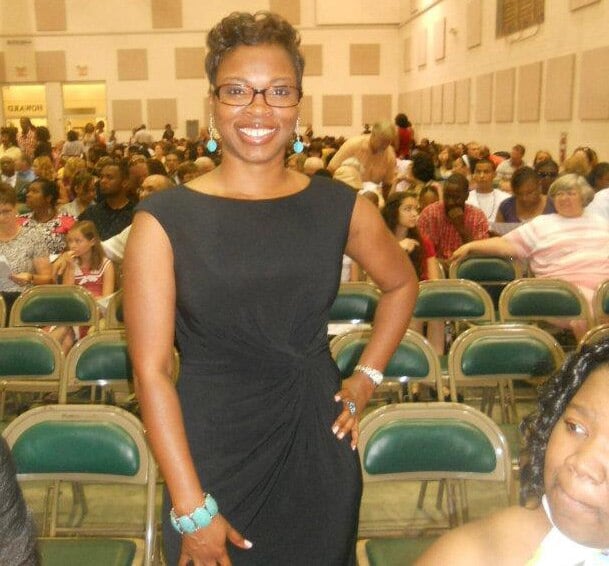 Fenika Miller of Houston, Georgia, is hoping her non-biding ballot questions will send a message to lawmakers at the state Capitol.

In an effort to bring attention to the Georgia’s “Stand Your Ground,” a Houston County Democrat wants her fellow party members to answer two non-binding questions listed on the Democratic ballot that concern the controversial self-defense law.

Fenika Miller, the Democratic party chairwoman, believes that the state’s SYG law, which removes one’s duty to retreat and allows one to use deadly force if one reasonably fears for one’s life, is dangerously ambiguous and in need of either outright repeal or serious reform.

“There’s no duty to retreat, no clarity in the law. It’s based on your reasonable presumption of fear,” she explained to local affiliate 13WMAZ.

Consequently, she’s urging Democrats to answer “yes” to questions number six and seven when they fill out their ballot on May 10.

6: Should the Georgia Legislature repeal the GA Stand Your Ground Law (O.C.G.A. 16-3-23.1) and return to the settled common law on self-defense?

7: If the Georgia Legislature elects not to repeal the GA Stand Your Ground Law (O.C.G.A. 16-3-23.1), should the Legislature amend the current law to remove ambiguity and restore the duty to retreat outside of one’s home or place of business?

Although the questions are non-binding, which means they’re really only a way to gauge public perception of the law, Miller believes that if enough people answer “yes” it will send a strong message to the state Legislature and could, perhaps, precipitate hearings that lead to new policy.

“The house leader does have the authority to advance legislation,” she noted. “He can nudge them into reforming and amending, or repealing and ending the Stand Your Ground Law in Georgia.”

Meanwhile, Kelly Burke, the purveyor of Houston County Carries Concealed, thinks that the law in its current form is not only common sense, but falls in line with Peach State ethos.

“Georgia’s kind of a southern defend myself, defend my honor, defend my family state,” he said. “I don’t see that you’re ever going to get to the point that Georgia backs down.” 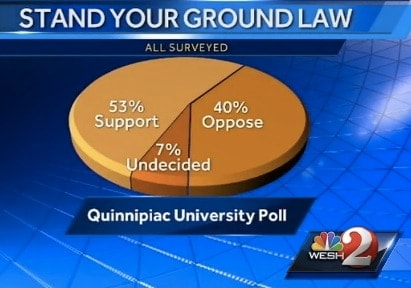 Results of a National Quinnipiac University poll on Stand Your Ground from August 2013. (Photo credit: NBC)

Furthermore, Burke argued that common law never required one to retreat in the face of imminent danger, making the questions on the ballot contradictory.

Overall, he believes Miller’s effort to raise the level of attention on SYG thereby persuading lawmakers to revise or repeal the law will fall flat on its face, quipping, “Good luck with that.”

This is not the first time someone has tried to pressure state lawmakers into upending Georgia’s SYG law. Last November, civil rights activist Rev. Jesse Jackson, along with his Rainbow Push Coalition, filed a lawsuit in federal court aiming to repeal the state law.

“Our sense of justice is being surrendered to madness such as stand your ground laws,” the reverend said at a Nov. 1 rally.

“The law must be a deterrent to murder. This law is virtually an incentive,” Jackson said, adding, “People are being killed and punished arbitrarily and the law should be consistent and not arbitrary.”

Yet despite this legal challenge, and others like them in various states that have similar laws, SYG remains relatively popular in public polling. A national Quinnipiac Univiersity poll conducted in August 2013 found that 53 percent of voters favored SYG, compared with 40 percent that opposed it.