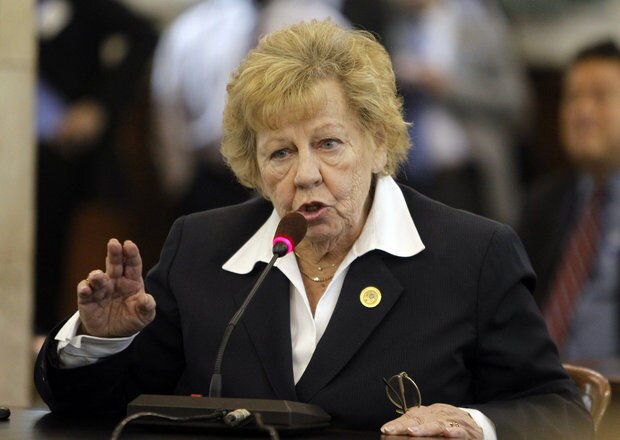 New Jersey Senate Majority Leader Loretta Weinberg came out swinging against the National Rifle Association this week, promising to repeal the state’s dormant smart gun mandate if the gun lobby agrees not to stand in the way of furthering the technology.

The Democratic lawmaker was an original supporter of the 2002 bill that became known as New Jersey’s “smart gun law.” It would require that all guns sold in the Garden State be equipped with smart-gun capabilities within three years of the technology becoming practical.

The roll out of the law, however, was placed on hold with the state Attorney General making a report every six months with updates on “the availability of personalized handguns for retail sales purposes.”

“If the NRA — the gun owners of America, those people who have stood in the way, not only of the retail sales, they have gone after gun manufacturers, who were beginning to develop technology other than Armatix,” said Weinberg in an interview with MSNBC’s Chris Hayes.

Armatix is a German company marketing the iP1, an RFID-equipped handgun that requires a companion wristwatch to work. The pistol has been the center of controversy as the first two shops — in California and Maryland — that considered carrying it received harsh criticism by gun-rights advocates, some arguing that selling it may encourage more laws like the one in New Jersey.

Weinberg now believes that her very bill is an obstacle to furthering smart gun technology. As such, she offered something of a truce on the issue.

“If in fact, they [the NRA]  would get out of the way of preventing the research, development, manufacture, distribution and sale [of smart guns] I would move to repeal this law in the state of New Jersey,” Weinberg said.

As rebuttal to this, the NRA issued a short comment on the offer with Chris Cox, executive director of the NRA’s Institute for Legislative Action, saying, “The NRA is interested in a full repeal of New Jersey’s misguided law.”

“It only took Sen. Weinberg and her anti-gun colleagues a dozen years to understand what we told them when they voted for the law, namely that there is no safe and reliable product available, which is still true,” said Lawrence Keane, senior vice president and general counsel for the NSSF, to Guns.com on Tuesday.

Keane however, made sure to point out that the industry is not against advances in technology but rather the politics that would make its use arbitrary.

“Manufacturers should be free to sell to consumers the products that meet their needs, and they want to purchase. If there is consumer demand for such a product the market will work. The state of New Jersey has no business making that choice for its citizens,” Keane said. “The Second Amendment doesn’t say citizens have the ‘right to keep and bear only the arms the state government says they will be permitted to buy.'”

Those who have been literally on the front lines of the debate and have the battle scars to prove it see the possibility of New Jersey repealing its smart-gun law as a very desirable outcome.

“I would be beyond happy if they repealed that law,” said Andrew Raymond, part-owner of Engage Armament, the Maryland store who flirted briefly with the Armatix iP1 last week to Guns.com. “I think it was an outrageous, illegal, and unconstitutional law to begin with.”

When asked if he would carry a smart gun in the future, Raymond was honest and candid.

“I hope people sell it once the law gets overturned, and if people don’t like it they shouldn’t buy it. That’s the beauty of the free market. In the end though, I won’t ever carry it,” Raymond said. “It’s just not in my nature. I got bullied yeah, but in the end, man, this gun and this whole fiasco was is so permeated with negative happenings and feelings that if I don’t see another one for as long as I live it will be too soon.”