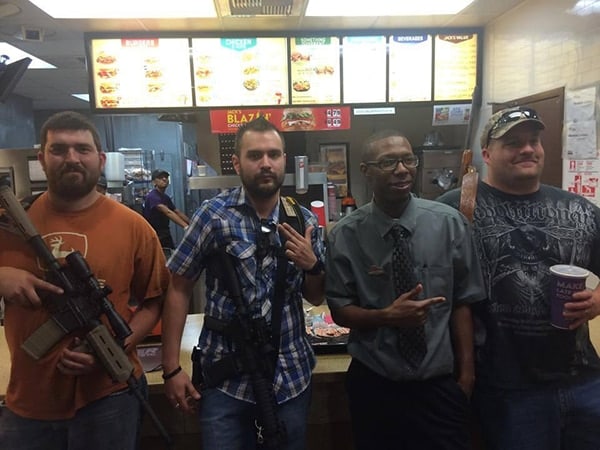 Open carry activists at a Fort Worth Jack in the Box drew the attention of police following a 911 call. (Photo credit: Facebook)

An open carry protest in a Fort Worth-area Jack in the Box last week ended with controversy, calls to local law enforcement, and a fracture inside a well-known Texas Second Amendment group.

According to reports in the local media, a peaceful open-carry event ended up with more than a dozen officers on scene and the restaurant staff hiding inside the store’s walk-in freezer.

“They locked themselves inside a freezer for protection out of fear the rifle-carrying men would rob them,” said Sgt. Ray Bush, with the Fort Worth Police Department, of the May 1 incident.

“The demonstration had no signage that would have alerted anyone to their real purpose, and to our knowledge they did not attempt to contact anyone in the Fort Worth Police Department to advise us prior to the demonstration,” explained Bush.

The response, according to Edwin Haros, one of the open-carry activists at the event, was unnecessary.

“Everyone was nice at the Jack in the Box. We ordered, received our food, walked back out,” said Haros, a member of the Tarrant County Chapter of Open Carry Texas (OCT).

In images posted to OCT’s Facebook page, members are shown posing with what appear to be restaurant employees.

The parent group states that its goals are to educate, condition the public to, and encourage the practice of openly carrying firearms in the Lone Star State. 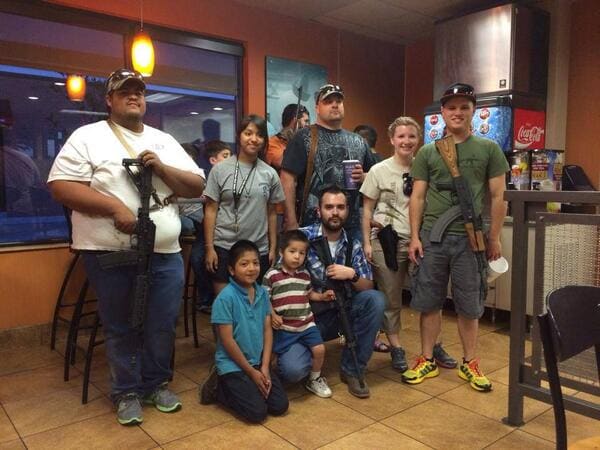 However, they take exception to the version of events as explained by the media and by extension, the Fort Worth Police Department.

“The 911 call was made by a couple in the restaurant,” explained OCT. “We are working to get the 911 call, the police report, and other recordings to find out where this information originated and expose those reporting false information to achieve their anti-gun agendas.”

This would not be the first time the group sought emergency dispatch call information following a police response. An April incident left the activists vowing to publicly identify 911 callers who complain about armed demonstrations.

Open Carry Texas, however has agreed to a “mutual split” between the parent organization and the Tarrant County group because of differing opinions about how to move forward with getting open-carry legislation passed.

Nevertheless, the publicity from the Fort Worth event has drawn comment from a national gun-control group.

“We are alarmed and appalled by this weekend’s events – but this is not an isolated incident – it is one of hundreds of similar open carry events staged across the state in the last year,” wrote Kellye Burke, Texas chapter leader of Moms Demand Action for Gun Sense in America in a prepared statement released Monday.

Burke continued, “Texas moms were saddened to hear that, according to Fort Worth police, employees of the Jack In The Box were terrified of the armed group and even locked themselves in a walk-in freezer to protect themselves – and we can’t help but wonder, ‘what if one of our teenagers worked there?'”

Meanwhile, the Tarrant County group, now independent, intends to continue with their activism.

Guns.com reached out to the Jack in the Box location in question at 7960 South Freeway, but did not get a clear answer on exactly what transpired. We are still awaiting a response from the company’s corporate headquarters.