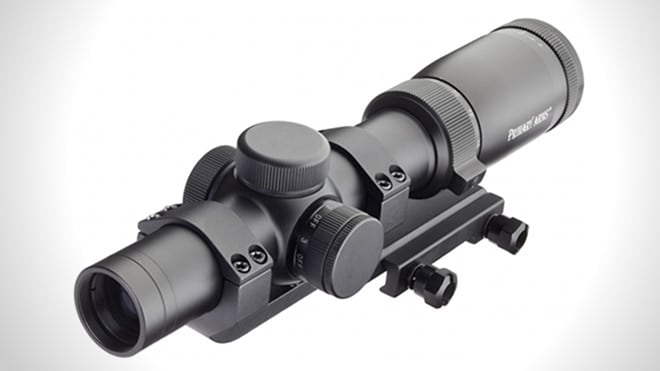 Primary Arms is a leader in low-cost optics that have some of the best value on the market. Its glass is inexpensive but holds up with the best of them even in harsh conditions.

And the company is expanding on two of its more interesting new products, adding a second 1-6x variable-power scope with a dedicated 300 AAC Blackout reticle — which will serve just fine as a 7.62x39mm or even .30-30 Winchester reticle — patterned off its 1-6x scope for 5.56, 5.45 and 7.62 NATO rifles as well as a fixed 4x prismatic scope based on their 2.5x model.

At $249 and $259, respectively, these scopes cost hundreds less than their competition while offering a lot of performance. No one’s going to fault Primary Arms’ 4x scope for being a little rough around the edges compared to a Trijicon ACOG for a quarter of its price.

Starting with the variable-power scope, the 1-6x-power optic is built around Primary Arms’ ACSS reticle, or “Advanced Combined Sighting System.” This straight-forward reticle is designed to make it easy for a casual shooter to estimate distances and calculate hold-over.

The scope is ideal for AK and AR users looking to shoot at longer ranges without breaking the bank. The 1-6x scope costs a fraction of what competing glass runs for, which starts at around $1,000 and goes up from there. The only product like it is the other 1-6x scope by Primary Arms.

Here’s a run-down of the scope’s specifications. For all the details head over to the product page. 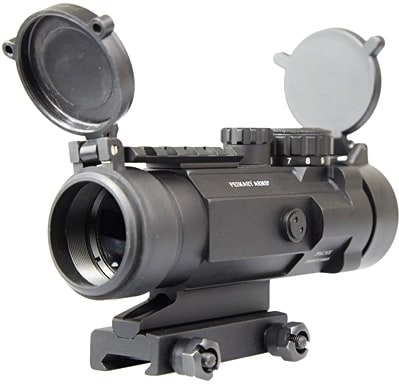 The fixed 4x prismatic scope is also going to be popular. A notch above the company’s conventional red dot sights, prismatic scopes offer users a level of clarity greater than possible with traditional lenses. The use of prisms also cuts distortion and makes the reticle appear significantly sharper, a huge pro for anyone with astigmatism or other vision issues.

The 4x scope is a step up in cost over Primary Arms’ red dot sights, which are almost all offered below $100, but even at $259 it’s still a budget optic, especially compared to other prismatic scopes on the market.

The Bang Switch sums it up well. “The optics look very sharp. While they won’t compare to the brightness of an ACOG, Browe BCO or ELCAN, the sight is pretty darn close and is surprisingly bright and clear.”

The Primary Arms 4X Compact Prism scope is built to work with Trijicon ACOG mounts and comes with a removable base for use with standard AR flattop rails. The included base is designed to mount to standard AR carry handles as well.

Like the variable-power scopes the Prism is equipped with Primary Arms’ ACSS with holdovers for shooting at targets out to 800 yards.

The 4x Prism specifications are as follows. For more head over to the product page.

These prices can’t be matched, let alone, beat. If you’re on a budget Primary Arms is at the top of the list when it comes to solid glass at great prices. For more about these and other optics, head over to the Primary Arms website.