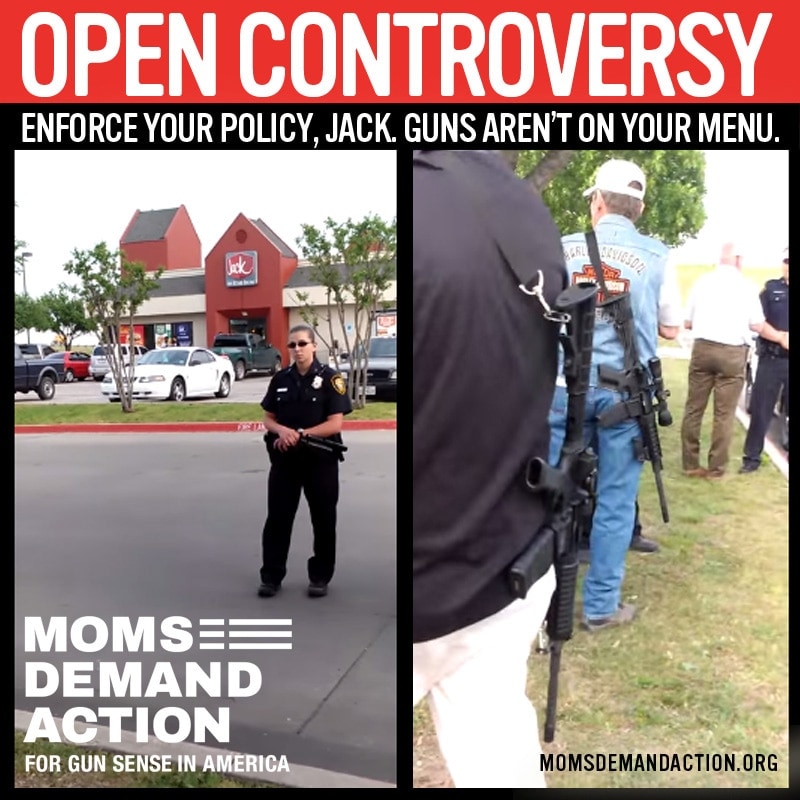 Following police and media reports that Jack in the Box employees at a Fort Worth store hid in the freezer following a visit by a group of open-carry protesters, Moms Demand Action for Gun Sense in America started a petition urging the burger chain’s leadership to enforce its ban on firearms at corporate-owned stores.

Citing what they believe are lax gun laws in the Lone Star State, the pro-gun control organization — which along with Mayors Against Illegal Guns makes up Everytown for Gun Safety — believes that open-carry demonstrations cause confusion for customers, employees and law enforcement because they cannot tell whether or not the armed activists are good guys or bad guys with guns.

“Where state gun laws dangerously allow individuals with no background check or training to buy semi-automatic rifles and carry them openly in public, businesses have a duty to protect their employees and patrons,” Shannon Watts, the groups founder, said in a press release.

“That’s why we are calling on Jack In the Box and other businesses to follow Starbucks’ lead and prohibit the open carry of rifles on their property,” she added.

Watts was referring to an open letter by Starbucks CEO Howard Schultz, which politely asked gun owners to leave their firearms at home and open carry protesters to hold there demonstrations elsewhere.

“To be clear: we do not want these events in our stores,” wrote Schultz.

Meanwhile, those members of the Tarrant County Chapter of Open Carry Texas that attended the demonstration last week claim that no one was alarmed by their presence.

“The 911 call was made by a couple in the restaurant,” explained OCT. “We are working to get the 911 call, the police report, and other recordings to find out where this information originated and expose those reporting false information to achieve their anti-gun agendas.”

Though there may be a dispute over what actually went down at that corporate-owned location, Moms is standing by its request.

“Jack in the Box is disregarding the safety and peace of mind of patrons, employees and law enforcement by allowing groups and individuals to openly carry shotguns and rifles onto their properties,” said Kellye Burke, Texas Chapter Leader of Moms.

“These businesses are subjecting hourly employees to danger and fear – and their customers, in search of burgers, to the potential for bullets,” she added.