The teen charged with fatally shooting two Alaska state troopers in the rural town of Tanana was arraigned in court Saturday and if convicted, will likely spend the remainder of his life in prison.

Nathanial Lee Kangas, 19, was inside his home when Troopers Gabriel Rich and Sgt. Patrick Johnson tried to arrest his father. In the ensuing scuffle, Kangas emerged with a rifle and fatally shot both troopers a total of seven times. Kangas was arrested and two days later he was arraigned in Fairbanks court, where dozens of state troopers lined the walls. He was charged with two counts of first-degree murder and one count of third-degree assault, and if convicted, could face up to 200 years in prison, CBS reports.

During the arraignment, Kangas’ mother, Judy, and younger brother, Albert, struggled to give a brief apology. 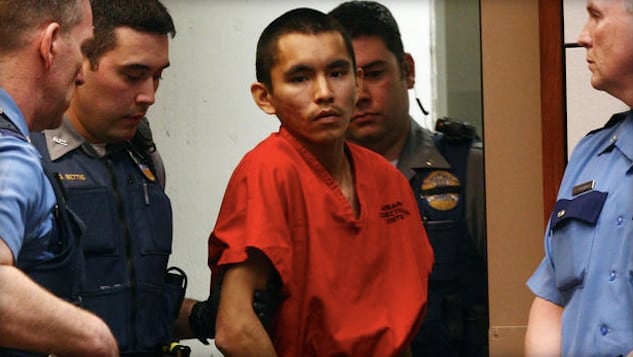 Kangas was brought into the courtroom in handcuffs and if convicted of his charges, could spend the rest of his life in prison.

“I want to tell everybody, the families, from the bottom of my heart that I am sorry,” said Judy.

The walls of the courtroom were lined with Alaska state troopers and according to Capt. Burke Barrick, it was an emotional time for everyone present.

“It was obviously very tough for the men and women who showed up for court today,” Barrick said. “It was difficult for the families and you saw the emotion from the law enforcement officers. It was very difficult for many people but I’m glad the arraignment is over.”

Kangas was determined to be a flight risk and his bail was set at $2 million.