An Arizona woman is still shaken up after a violent attack inside her home where she was forced to shoot her assailant in order to defend herself Tuesday morning.

The 20-year-old suspect broke into the 47-year-old woman’s Phoenix house around 7:20 a.m. But she saw the man coming and prepared by grabbing a gun and hiding in the bathroom, AZ Central reports. When the suspect found her, he assaulted her. The victim fought back and fired a single shot. The round found its target and the suspect collapsed on the floor, injured, but still alive.

Before the home invasion began, the 20-year-old suspect had walked from house to house, searching for an unlocked residence. When he didn’t find one he rang the doorbell of the victim’s house. She didn’t answer, and the suspect started rattling doors and peering through windows. And that’s when the woman armed herself and hunkered down in the bathroom.

Now certain she was being burglarized, the woman called 911. Moments later the suspect found his way to the bathroom. He punched her several times in the face, but she refused to go down without a fight and fired a single round from her handgun.

The suspect was incapacitated and was transported to an area hospital to be treated for his injury, which was not life-threatening. The woman only suffered minor injuries. 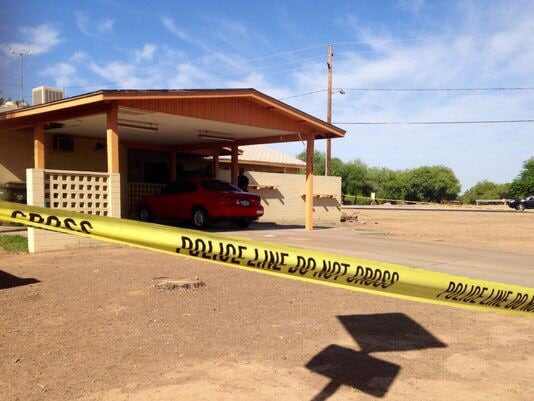 Some of the woman’s neighbors said they didn’t know she was armed, but glad she was. (Photo credit: AZ Central)

The victim’s neighbors, Hector Heredia, assured AZ Family she was ok, if not a little rattled from the incident.

“She’s doing good. She’s scared. You can tell she’s still traumatized by what happened,” Heredia said. “I didn’t know that she was armed, so I’m glad she was. Because who knows who far this would have gone.”

Another neighbor, Karen Sturgeon, praised the homeowner for defending herself.

Sgt. Thompson said the victim acted within her legal rights, and if she hadn’t taken matters into her own hands, things would have likely turned out very differently.

“The woman was certainly acting within her rights to defend herself,” Thompson said. “Keep in mind that not only was she the victim of a burglary, but then she was the victim of an assault. One can only ask the question: What might have happened had she not taken the action she did to end this confrontation.”

When the suspect is released from the hospital he will face assault and burglary charges.