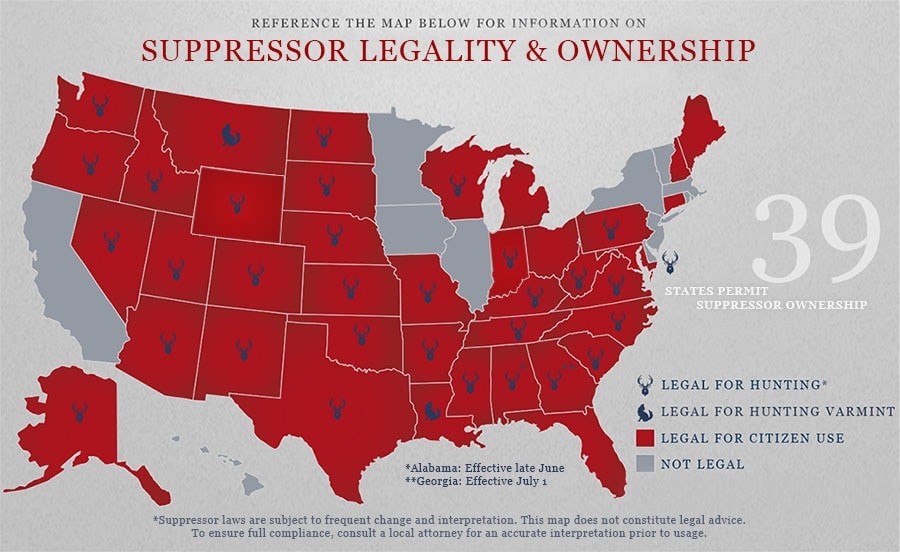 A map of where suppressors are legal to own and where they may be used for hunting.

While “silencer” is the original name — and legal name, in the U.S. — for noise-mitigating muzzle devices, other names have become popular over the years, like suppressor, muffler and moderator. The reason being that the more modern terms aren’t as absolute as silencer.

“We feel that this is a necessary step to portray our industry in the most accurate light while advocating and educating the public on behalf of the suppressor industry,” the ASA said in a statement.

Suppressed firearms are still quite loud, but in some television, movies and video games they are represented as being literally silent, or very close to it. This, along with the name silencer, gives people the wrong impression about suppressors.

“The core mission of the ASA is to educate the public on the merits of suppressors,” the ASA said. “To do so, we must first dispel the widespread notion that firearm suppressors can silence their host gun. To those familiar with suppressors, the difference between the two terms is largely semantics.

“However, to the millions of Americans whose only exposure to suppressors has been through Hollywood, the term ‘silencer’ takes on a literal meaning.

“Even the most effective suppressors on the smallest and quietest calibers reduce the peak sound level of the gunshot to that of a chainsaw or a hammer drill (110-115 dB). For most centerfire rifle and pistol calibers, suppressors can only reduce the peak sound level to that of a snare drum at a rock concert, or a jet engine at takeoff (130-140 dB).”

The ASA is building on the idea that suppressors are safety devices. In addition to lowering the risk of temporary and permanent hearing loss, suppressors reduce recoil and make shooting safer in general.

The organization has been critical in expanding the legalities of owning and using suppressors and has pushed to overturn state bans on ownership and legalizing their use for hunting.

They have also been involved in drafting “shall sign” legislation. Shall sign legislation is similar to “shall issue” concealed carry systems that requires the Chief Law Enforcement Officers to signoff on National Firearms Act applications inside a pre-determined period of time. This is to prevent local law enforcement from creating delays and de-facto bans in the silencer purchasing process.

For more information about the ASA and their actions, head over to its new website.