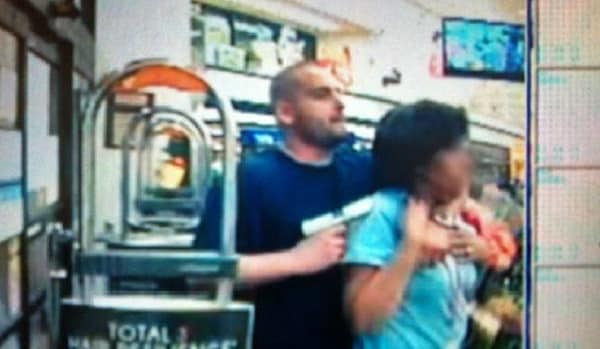 Adrian Montesano is seen in this surveillance still robbing a Walgreen’s in Miami on December 10, 2013. (Photo credit: FOP)

The details of a December 2013 police shooting in Miami that involved 23 police officers, two unarmed suspects and a scene riddled with 377 bullet holes are bringing into question the use of force.

The incident occurred when law enforcement cornered a suspect who had been identified in an earlier armed robbery of a drug store and a shooting of a Miami Dade Police officer. Once the driver and his passenger were trapped, reports from CBS4 Miami contend that responding units opened fire on the two unarmed individuals inside the car, who survived the initial shooting.

A second fusillade, fired some two minutes later and lasting nearly 25 seconds ended the shootout, leaving three officers injured by friendly fire and the suspects with mortal wounds. An additional two officers suffered ruptured eardrums from all the noise.

In all, the responding officers fired 377 rounds over the course of the engagement. This left not only the suspect’s car but also nearby homes and structures riddled with bullets.

Police identified the subjects as Adrian Montesano, 27, wanted in a prior robbery, and his passenger as Corsini Valdes, 50, after the incident. While both Montesano and Valdes would die of their wounds, the five officers injured in the gunfight as well as the officer shot earlier that day by the primary suspect would recover after treatment. 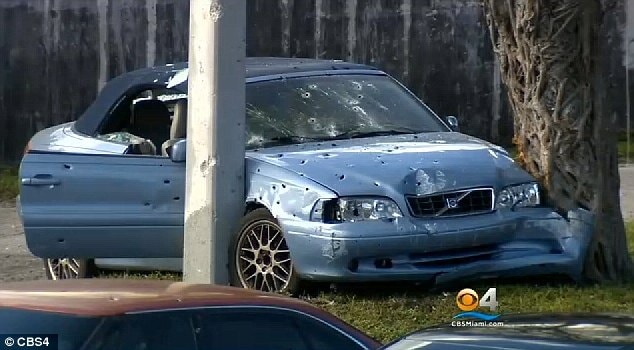 The shootout occurred some two hours after Montesano is believed to have robbed a Walgreens in the Little Havana area of Miami at gunpoint. He then ditched his pickup truck and encountered Miami Dade Police Officer Saul Rodriguez. After shooting Rodriguez in the abdomen and stealing the injured officer’s duty weapon and car, Montesano was spotted within the hour in his grandmother’s blue Volvo with Valdes as his passenger.

Following a chase, the car crashed between a light post and a tree, wedged and immobilized.

In the ensuing gunfight, now under extensive review by both the State Attorney’s Office and the Miami Dade Police Department, the situation on the ground was very confusing. As reported by CBS4, supervisors and dispatchers attempted in vain to control the situation. Once it was realized that the subjects were immobilized, special response teams were called in but could not reach the scene due to the number of other responding units.

Although the suspect had used a gun in the robbery as well as the shooting of Rodriguez, and had further stolen the injured officer’s firearm, no guns were recovered from the suspect or his passenger following the gunfight.

The family of the Montesanto, who lived with his parents and ran an air-conditioning service before his apparent turn to crime, expressed disbelief over the incident. Prior to the Dec. 10, 2013 robbery, he had only had one run in with the law, which was settled with a $500 fine. However, they did explain that Montesanto did have past issues with drug dependency.

It is not known what role Valdes played in that morning’s events, but he had and extensive criminal history, having been charged with some 40 crimes since 1988, including drug possession and trafficking, battery, burglary and trespassing.

Police Benevolent Association President John Rivera called Montesano and Valdes dangerous men. “If they are so brazen to shoot at authority, they have absolutely no care for civilians and civilian life.”

There is no known date for release of the official reports in the shooting.