The dashcam footage has been released of the 2013 Dallas officer-involved fatal shooting of a suspect that slipped his cuffs, pulled a hidden gun, and shot his way out from the back seat of a patrol car.

The incident took place in the Highland Park suburb on June 4 of last year. After a brief struggle, Dallas officers arrested David Hartman, 32, on suspicion of stealing a motorcycle. Hartman was handcuffed and searched and placed in the back of the patrol car. But moments later he slipped his cuffs and presented a compact handgun. He shot out the window and fled on foot, but only made it several steps before being fatally shot by officers, FOX 7 reports.

The officer that searched Hartman missed the handgun, and Austin Police Association President Wayne Vincent says he knows exactly why. 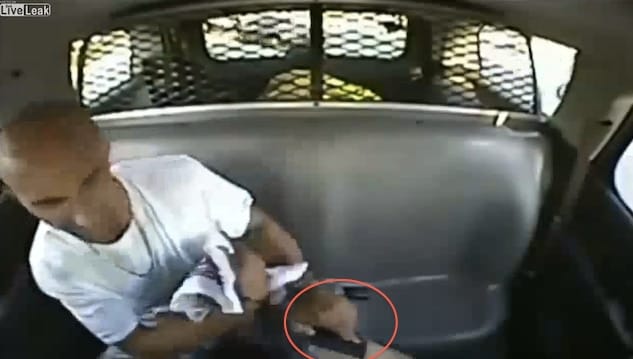 When the officer tried to search him, David Hartman tensed up in an effort to conceal his handgun. When the officer left, Hartman retrieved the weapon and shot out the window during his escape.

“The officer was going to look in that direction, but chose not to so he didn’t escalate anything,” Vincent said. “That could’ve gotten somebody killed.”

The officer performed more of a pat down than an actual search. If a suspect is detained, but not arrested, it’s appropriate to pat them down. If a suspect is arrested, a full out search is required, and Vincent explains the difference between the two.

“There’s a difference between a pat down and a search. If we’re patting down, just to make sure you don’t have weapons, it’s an outside search for hard objects that might hurt us. A search is what happens when you make the arrest. When the handcuffs go on you search before you put them in the car,” Vincent explained.

Vincent said he understands how something like this could have happened, and even confessed to having made a similar mistake during his career. Instead of criticizing Hartman, he used the mistake to keep other officers ever vigilant.

Vincent said, “It’s just another stark reminder that we as police officers cannot let our guard down no matter who we think we’re talking to and who we’re dealing with.”