To some extent, I understand it. We all get angry, we all get frustrated, we all have bad days and we all need to vent.

This is certainly true when it comes to debating the issues that matter most to us, which for many who frequent this domain is our Constitutional right to keep and bear arms for traditionally lawfully purposes such as self defense.

With that being said, leaving an explicit, sodomy-laced voicemail for the executive director of the Coalition to Stop Gun Violence is not, I repeat NOT, the best way to release one’s rage or frustration with those who believe we need to reform the nation’s gun laws.

Sure, it may be cathartic to do so, to yell obscenities at the opposition with impunity, but one needs to think about the larger pro-gun rights movement and how this makes us look to the non-gun owning public before they dial the phone and hurl some insults.

Unfortunately, the individual from the youtube video above did not consider the broader impact his sodomy-obsessed call before he proceeded to make it.

“I guess you would like that to watch your daughter or wife get raped or sodomized or killed by multiple people as you have some guy put a gun to your head because you don’t believe in guns — right?” exclaimed the man in his voicemail to Josh Horwitz, the head of CSGV.

“Are you fucking people for real? Are you really that stupid? Are you actually that naive?” he later added, in apparent state of disbelief.

It goes without saying but the caller’s argument fails for two primary reasons. First, the straw man — which is an exaggeration or distortion of one’s position. CSGV leadership never said that they don’t believe in firearms. But even they had said that, it still wouldn’t logically follow that they are in favor of watching their loved ones get sodomized by a clan of serial rapists.

In other words, one can support gun control and still be opposed to watching their mothers, wives, daughters get raped and tormented with curling irons. 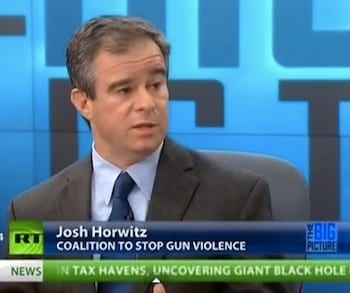 Josh Horwitz from the Coalition to Stop Gun Violence appears on RT’s The Big Picture shortly after the mass shooting in Aurora Colorado. (Photo Credit: RT)

Instead of distorting CSGV’s position, one can simply point out that while one can — in lieu of firearms — favor door locks, security alarms, non-lethal self-defense implements (stun guns, pepper spray), unarmed neighborhood watch patrols, the presence of law enforcement, etc., to combat maundering sodomites, the optimal way to stop a bad guy with a gun is a good guy with a gun.

It seems fundamentally that one either agrees with the notion that firearms are the most effective means a private citizen has to defend one’s family and property or they don’t — an argument that is completely independent from one’s thoughts on sodomy, rape and murder.

The second reason the caller’s rant fails is because of the name-calling and foul language. Instead of focusing on CSGV’s positions, he started attacking them personally, suggesting that they were stupid and naive for not seeing things his way.

Implying that someone is stupid for not agreeing with one’s argument is not advancing the conversation in any meaningful way. In fact, it does just the opposite. It creates gridlock, leading to a more polarized and dysfunctional environment, which only retards the ongoing effort to win the hearts and minds of the non-gun owning public.

Consider what one commenter had to say about the voicemail on the CSGV Facebook page:

“The caller from Memphis seems to have a strange, almost pathological, obsession with rape and sodomy and a vivid imagination chock full of violent sexual imagery. I would hesitate to allow him to carry a gun. But he does fill the bill as this month’s centerfold for Gun Nut of the Month.”

Another commenter wrote, “LOL Yeah,,, that will help their cause. Please encourage him to go public with this. With friends like this the sane in this country won’t have to work as hard.”

The caller’s outburst is exactly what gun owners want to avoid doing because it not only makes them look bad, but it makes us all look bad. Unavoidable, the mainstream media paints gun owners with a very broad brushstroke. We don’t want to give them any more ammunition to perpetuate the stereotype that gun owners are paranoid, sodomy-obsessed freaks.

For a guide on how to talk to representatives for the Coalition to Stop Gun Violence, you can check out my interviews (here and here) with Ladd Everitt, the group’s communication director.