The Firearms and Fashion show: A soft intro to the shooting world 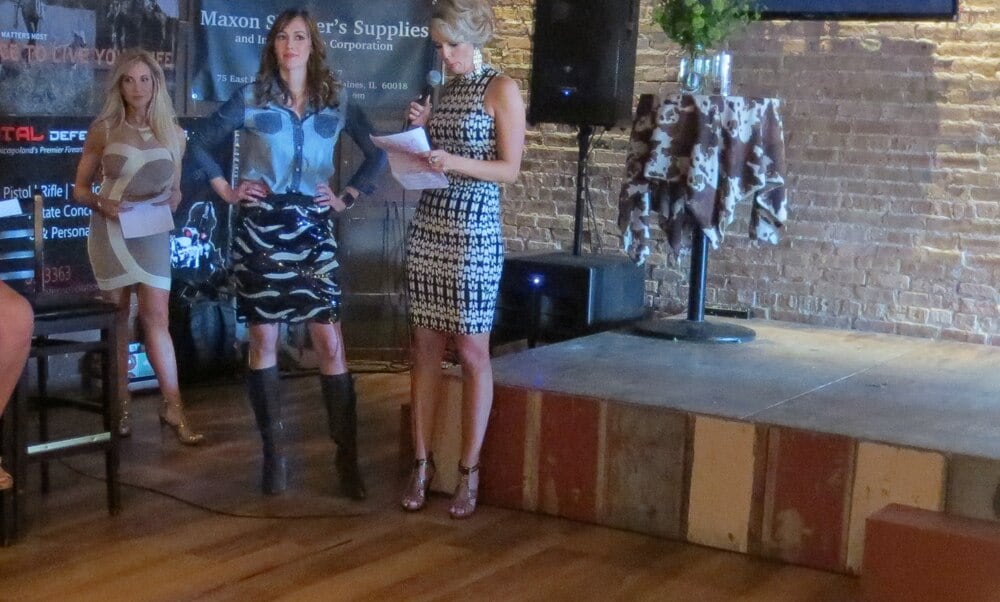 A bar on the far north side of Chicago, in a town called Edison Park, hosted the second annual Firearms and Fashion show Saturday night.

The event is a collaborative effort by two local companies — AlphaGirls, a self-defense training and gear company, and Nickel and Lace, a designer and concealed-carry clothing company for women — that acts as a conduit to soft sell the concepts of self-defense and shooting sports to women.

“By incorporating fashion, we hope to reach a broader audience of women,” said Karen Bartuch, owner of AlphaGirls and former Chicago Police officer. “Now more than ever, women need to be responsible for their own safety and protecting themselves and their families.”

Plus, the show was just a really fun party. For $50 per ticket, an attendee has access to the show, an open bar, and food, and can buy tickets for gun raffles. Proceeds from the event go towards the Chicago Police Memorial Foundation, a group that offers financial aid to the families of Chicago police officers who are wounded or killed.

The venue, a bar called the Firewater Saloon, was a decent size, new-age honky tonk kind of place, but small compared to last year. Although the event sold out, only 212 people could attend, as that’s maximum capacity for the building. Last year 325 people attended the show, but it was held at a much larger venue, said Marilyn Smolenski, owner of Nickel and Lace. 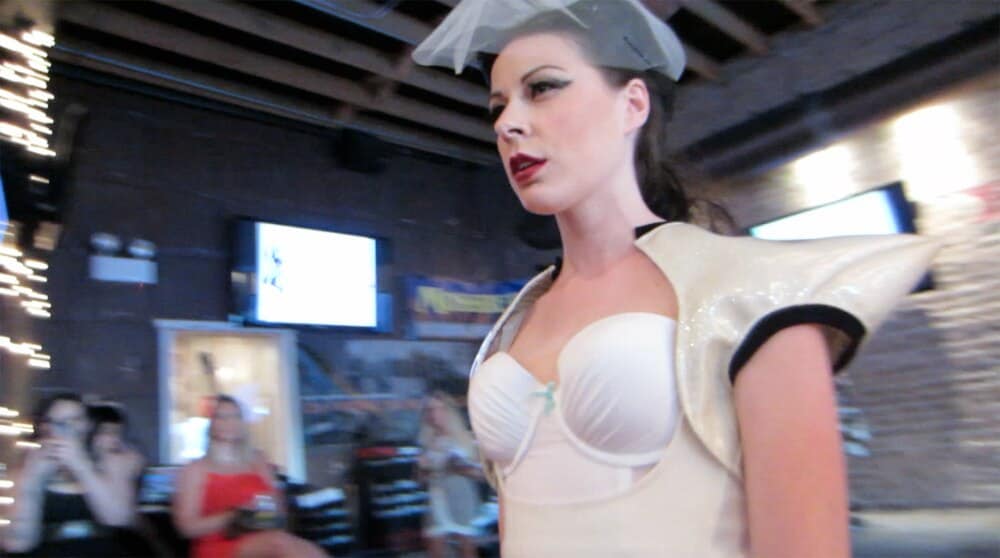 With the brick walls, hard wood floors, smooth bar tops and a center stage, the atmosphere was comfortable and described by many as “intimate.” Despite the tight quarters, the event went swimmingly.

The weather Saturday night turned out to be beautiful, leaving Chicagoans, who have been enduring cold temperatures and snow late into spring, to wonder if summer is actually near. Overall, it was the ideal temperature for models to strut around in playful and revealing designer clothes.

When doors opened at 5:30 p.m. attendants quickly gathered, getting drinks, perusing various vendors that range from apparel, jewelry, training to advocacy groups, or buying raffle tickets for guns, gear and training. But as the people gathered and fashion time neared, organizers carved the runway out of the crowd, forming a wall of people.

Models entered the floor from the rear of the bar to hard rock, pop country and later to the electronic music one would expect at a fashion show. While all the models strutted up to the stage, struck a pose and then turned back, some of them had a more dramatic flare.

At the intro to the Nickel and Lace clothing line, a bride with dark hair wearing white lingerie and a garter belt holding up high stockings, turned her back to the audience on stage and tossed her bouquet.

Photogs losing their shit over a model strutting her stuff at the Firearms and Fashion show. (Photo by Aaron Samsel)

A long-legged blonde with buoyant hair commanded attention when her long legs brought her onto the floor, and giving each snapping camera a distinct glance. On stage she kept everyone’s attention as she whipped off her leather jacket and threw it over her shoulder.

While the majority of the models were tall, thin and had endlessly long legs, there were some beefcakes out there, too. At the introduction of the company Fermented Fruit, they marched out in leather outfits that accentuated their biceps and muscular shoulders, getting hoots and hollers from the ladies.

The fashion show occupied a good hour, and the performance and the music kept everyone engaged. Unlike other gun-related events where organizers tend to cheerlead the Second Amendment and rally the troops, so to speak, it was un-intimidating for those with just a spark of interest in guns. Politics was noticeably absent from the event, in fact, people in the crowd preferred to talk about guns or shooting.

Two women, both twenty-something, from a northwest suburb attended the show. Crystal, who didn’t give her last name but said she had been shooting for four years, brought a friend who has been going with her to the range for about a year.

Crystal, who also sells guns at a sporting goods store, said she attended because she knew people at the event would be open to women in the shooting world.

“I know a lot more than some guys think I do, and they’ll walk right passed me (at work) because they assume I don’t know what I’m talking about,” Crystal said, adding that she sees many customers buy guns based on the look of the gun rather than any hard research. “If it says ‘tactical,’ they’ll buy it.”

Crystal also explained that the customers who are informed and are educated about the technology treat her as they would any of her coworkers.

Others at the event said they attended for the raffles, because it supported a charity they liked, or simply because they knew someone there.

The Firearms and Fashion show probably won’t reach the ones who already know it all, but at least they’re creating a place for those who want to be there.