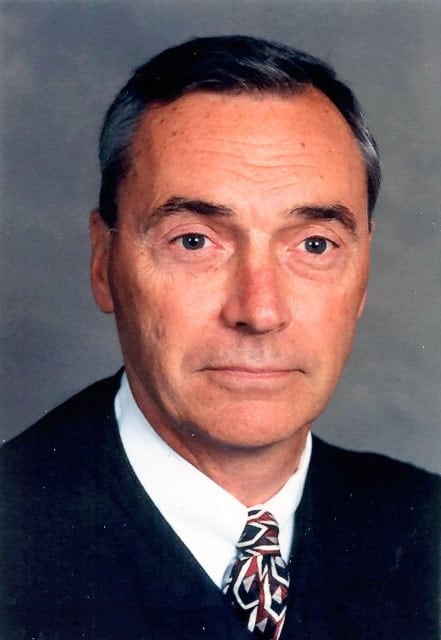 Senior U.S. District Judge Frederick Scullin heard arguments on Palmer v DC in 2012 but has yet to issue a ruling. (Photo credit: www.fjc.gov)

When the District of Columbia established a total ban on open and concealed carry in 2009, a federal lawsuit was filed that five years later is still in a holding pattern.

The suit, Palmer v District of Columbia, was brought by four plaintiffs in 2009 who were refused firearms permits by the Metro Police Department once they noted on their applications that they would carry their handguns in public for self-defense– and were denied registration on that basis.

Backed by the Second Amendment Foundation and helmed by Alan Gura, the attorney responsible for the landmark 2008 Heller case before the Supreme Court, Palmer was heard by the U.S. District Court for the District of Columbia in January 2010.

Now, well over four years later, as extensively reported by Emily Miller, the case is still in something of a legal Bermuda Triangle.

The District Court Judge who originally heard the case, Judge Henry. H. Kennedy, a Clinton-appointee, retired without ruling on Palmer.

The Supreme Court then reassigned the case to Senior Judge Frederick Scullin of the U.S. District Court, Northern District of New York. Scullin, a Bush appointee, reheard arguments in 2012 but has yet to issue a ruling.

Prior to Scullin being assigned the case, Gura and the Second Amendment Foundation fought and won the case of McDonald v Chicago, argued in front of the Supreme Court March 2, 2010, which determined that the Second Amendment applies not only to federal enclaves (as the Heller stated) but also to the individual states.

Besides McDonald, the Second Amendment Foundation filed a suit on behalf of a number of claimants in 2011 against the state of Illinois over the state’s arbitrary refusal to allow concealed carry permits. This case, Moore v Madigan was originally denied by the Illinois Federal District Court, but a 3-judge panel of the 7th U.S. Circuit reversed that ruling in 2012. This case led Illinois to move to its current shall-issue policy in regards to firearms permits, which was recently adopted.

Following Moore, Washington, D.C., was the last portion of the continental United States without an allowance for concealed carry permits under the framework of the Second Amendment.

Gura in August 2013 filed a Motion to expedite on Palmer, still unanswered. Following no resolution to the case, he then filed a rare Mandamus writ with the U.S. Circuit Court of Appeals in October to have that body compel Judge Scullin to finally issue a ruling.

When the Supreme Court last week declined hearing the petition for the Drake case, which challenged New Jersey’s draconian concealed carry laws, Gura told Guns.com “At least they issued a decision in Drake, which is more than can be said for Palmer v. D.C., our challenge to D.C.’s total carry ban languishing in the District Court without a decision since October 6, 2009.”

In the meantime, the District of Columbia remains without a vehicle for law-abiding citizens to obtain a firearms permit.