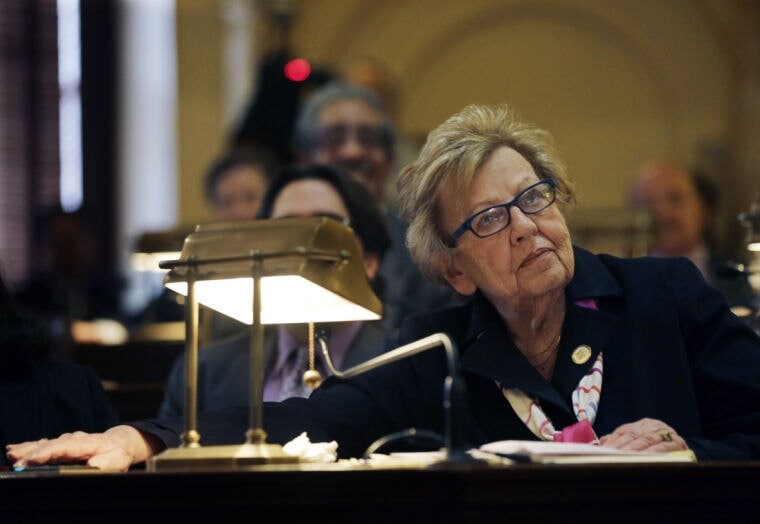 “Large capacity magazines have no purpose other than to kill as many people as possible as quickly as possible,” said Sen. Loretta Weinberg (D-Bergen) of a bill limiting magazine size passed by the New Jersey Senate Monday (Photo credit: Mel Evans/AP)

On Monday, the New Jersey state Senate passed, by 21-17 vote, a bill that would ban all firearm magazines, even non-detachable ones, capable of holding more than 10 rounds.

The measure was debated on the floor for 45 minutes before it was approved in a largely party-line vote. A previous deal that had been worked out to allow a companion bill to ease minor travel restrictions on gun owners also passed.

“Today we’re taking another step to fulfill a promise that many of us here made to the parents of the children of Sandy Hook Elementary School in Connecticut who suffered losses that are beyond comprehension,” said state Sen. Loretta Weinberg, (D-Bergen), the bill’s senate sponsor.

Weinberg recently made news when she offered to repeal the state’s dormant ‘smart-gun’ legislation in an effort to gain more public acceptance for that fledgling technology.

The bill in question, A2006/S993, would reduce the state’s current 15-round magazine limit down to 10-rounds. Unlike many state laws, such as in New York, that regulate only detachable magazines, New Jersey’s would also limit fixed magazines as well. The only exception would be for .22 rimfire rifles with fixed tubular magazines, such as the Marlin Model 60.

Both current and retired police officers, however, would be exempt from the restriction.

Sen. Michael Doherty, (R-23), however, argued that the bill would only affect law-abiding gun owners and not criminals, stating, “And the last thing they will do is say, ‘I better not take my 15-round magazine, I better only take my 10-round magazine,'” he said. “This is affecting law-abiding citizens, who want to protect their families or businesses.”

Likewise, gun-rights groups such as the National Rifle Association are opposed to the measure,  stating, “It’s clear that anti-gun state legislators have no intention of offering a genuine solution and are simply playing political games in Trenton.”

The New Jersey bill is a remnant from the controversial push in several states to place arbitrary magazine size limits following the 2012 Sandy Hook shooting. Within months of that tragedy, both Colorado and New York saw 15 and 7-round limits, respectfully, put into effect. New York’s was rejected by a federal judge while Colorado’s is mired in a pending lawsuit.

The New Jersey legislation is now headed to the State Assembly for a final vote. The prior version of the bill had made it through the Assembly by a 46-31 vote in March. If the current version passes that body it will then land on the desk of Gov. Chris Christie (R) who will have 45 days to veto or sign the bill into law.