South Bend Women gun up in wake of homicide uptick 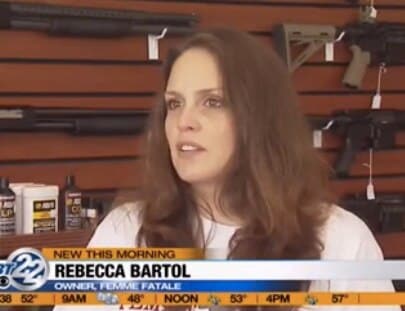 With an uptick in the number of homicides (seven) so far this year, women in South Bend, Indiana, are reportedly flocking to gun stores to gun up against the criminal element, according to local affiliate WSBT 22.

One business owner is catering specifically to this growing market segment of the gun community.

Rebecca Bartol, owner of Femme Fatale, a gun shop in South Bend, sells firearms and accessories that are geared toward women.

Bartol told the news station that she has noticed many first-time customers walking through her doors asking about guns and concealed carry for self-defense.

“We do have quite a few women who come in and are [saying], ‘I don’t have a firearm and I don’t know where to start,'” Bartol said.

While Bartol can hook them up with the right tool for the job, there is still a matter of training to become proficient with the firearm — and that’s where Sgt. Thomas Cameron of Metro Homicide comes in.

In addition to working as a law enforcement officer, Cameron teaches a firearms safety and training course sponsored by the Fraternal Order of Police called “Women on Target.”

Cameron claims he’s never had difficulty filling the 35 spots for each class, noting that the one taking place next weekend is already full.

“Women come for various reasons,” Cameron said. “Many times, they’re single, there’s something in their neighborhood, like a shooting, and they want to learn how [to shoot] and maybe purchase a gun in the future.” 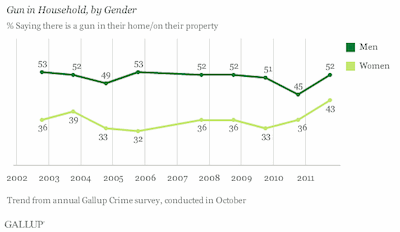 While men still make up the majority of gun owners, the number of women who own firearms is at the highest it’s been since 1993. (Photo credit: Gallup)

The spike in interest in gun ownership for women mirrors a nationwide trend. According to a 2012 report by the National Shooting Sports Foundation, the firearms industry trade association, 61 percent of firearm retailers surveyed said they say an increase in female customers in their stores.

The report also said that “participation by women increased in both target shooting (46.5 percent) and hunting (36.6 percent) in the last decade, according to the National Association of Sporting Goods Wholesalers.”

With the gun community growing and becoming more diverse it’s important for longtime gun owners to remind these newbies that purchasing a firearm is really just the first step into what amounts to a lifetime of training and discipline.

Picking out and purchasing the right firearm is the easy part, learning to use it safely in all sorts of situations, especially while under duress, is what takes time, patience and an undying resolve to continually improve one’s skill set.