Carrying a firearm openly in the state of Florida is a second degree misdemeanor — unless one is going hunting, fishing, target shooting or camping, then as long as one is law-abiding, as in not prohibited from carrying a firearm, one can openly carry.

Throughout the year, gun-rights supporters from around the state use the letter of the law to their advantage, openly toting a firearm along with a fishing pole in an effort to normalize non-gun owners to the site of armed citizens out in public.

Indubitably, these demonstrations always invite media scrutiny and coverage leading to a discussion of whether the putative “loophole” needs to be closed to outright ban open carrying in the Gunshine State under any circumstances or more fundamentally if one’s Second Amendment rights even includes the right to carry openly.

The latest event to draw the media spotlight was in Jacksonville Beach, where members of the pro-2A organization Florida Carry walked along the pier with their fishing lures, boxes, poles and, of course, their sidearms.

“Most people go ‘I didn’t know you could do that,'” said Chuck Berlinghoff, a member of the group, who participates in the monthly demonstration which occurs on the second Saturday of the month, to First Coast News. 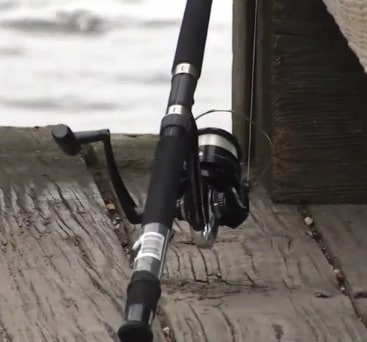 In addition to raising public awareness about the laws and about one’s right to carry, the group also wants to ensure law enforcement officers are well-informed about the issue.

Activist Jeff Gray, whose had multiple encounters with police, said that sometimes officers are aware of the law and other times he gets asked questions.

“Some counties I go to, they are not knowledgeable about the law and wind up detaining me and drawing guns on me and searching me, seizing my property,” said Gray.

Gray typically documents his encounters with police on his camera, subsequently posting the videos to Youtube, which has led to criticism that he is trying to bait them.

“The cops come up and ask what are you doing, ‘you know I’m fishing and hunting’, okay cool that’s you’re right have a good day,” said Gray, describing some of the friendly run-ins he’s had.

On the question of whether there is a loophole in the law, Marion Hammer, the founder of Unified Sportsmen of Florida and the National Rifle Association’s lobbyist in Florida, argued that there is no such thing.

“There is no so-called “loophole” in the law,” explained Hammer in an email to Guns.com “The law recognizes the right to carry firearms for lawful purposes as intended by the Constitution.”

Hammer went on to explain that the law was written in a manner to clarify that there is no loophole, moreover that those who “chose to try to skirt the law to make a point are violating the law and they do so at their own peril.”

“They are not using a so-called ‘loophole’ they are willfully violating the law,” she continued. “It’s that simple and law enforcement knows that.”

The former NRA president went on to say that attempts to bring negative attention to the law are encouraged by law enforcement officials who are solely focused on making things easy for police officers.

“St. Johns County Sheriff, David Shoar, is a lobbyist for the Florida Sheriffs Association,” explained Hammer. “And their anti-gun leadership is only concerned about the ‘convenience of law enforcement’ — that is very obvious in their statements and actions.”