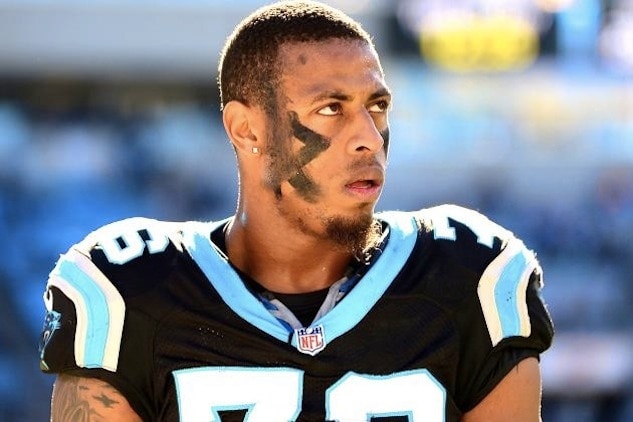 Panther’s lineman Greg Hardy was arrested and charged with assaulting a woman. He was released from jail, but now the judge has ordered him to turn over all his firearms.

NFL Panther’s star Greg Hardy was arrested Tuesday for assaulting a woman and throwing her on a ‘couch covered’ in guns. He was released the next morning on a $17,000 bond and ordered to attend Alcoholics Anonymous and stay away from the victim, Nicole Holder, CBS Sports reports.

According to Holder’s statement of the event:

“On May 13, 2014 Greg Hardy attacked me in his apartment. Hardy picked me up and threw me in the tile tub area of his bathroom. I have bruises from head to toe, including head, neck, back, shoulders, arms, legs elbow and feet. Hardy pulled me from the tub by my hair, screaming at me that he was going to kill me, break my arms and other threats that I completely believe. He drug me across the bathroom and out into the bedroom. Hardy choked me with both hands around my throat while I was lying on the floor. Hardy picked me up over his head and threw me onto a couch covered in assault rifles and/or shotguns. I landed on those weapons. Hardy bragged that all the assault rifles were loaded. Landing on those weapons bruised my neck and my back. Hardy screamed for his ‘administrative assistant’ (Sammy Curtis) to come into the room and hold me down. Curtis came into the room, grabbed me from behind and held me down. Hardy and Curtis then took me into the living room area. I wasn’t nearly strong or fast enough to escape. I begged them to let me go & I wouldn’t tell anyone what he did. They took me out into the hall, pushed me down & went back inside the apartment. I crawled to the elevator and ran into [Charlotte Mecklenburg Police Department].”

Holder also said Hardy has “approximately 25-30 firearms. AK-47s, automatic looking weapons, shotguns, rifles and pistols. Some are permitted and some are not.”

She added that Hardy threatened to shoot her if she went to the media or reported the assault.

But the 911 call placed by Hardy paints a different picture. During the conversation with the operator he says Holder was “literally kicking and scratching” him and that she had hit him twice in the face, according to Bleacher Report.

A tweet from The Charlotte Observer’s Joe Person revealed that the Judge has modified Hardy’s bond, and he now has to turn over any and all of his weapons and firearms.