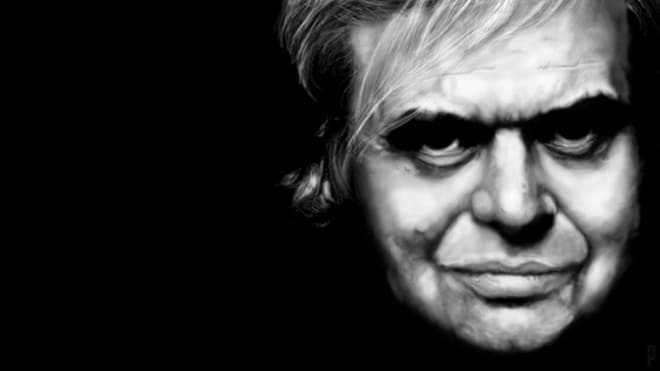 Acclaimed artist, architect, sculptor and set designer Hans Rudolf, or H.R. Giger, died this week unexpectedly from injuries suffered in a fall. Known for his haunting works that blurred the lines between organic life and twisted machines, Giger inspired a generation of artists, movie-makers, video game designers, musicians and more.

Giger is best known for bringing the alien from the movie “Alien” to life, the xenomorph, one of the greatest movie monsters of all time and earned Giger an Oscar.

His own inspiration came from within. A life-long sufferer of night terrors, he dealt with his dark visions through creative works. 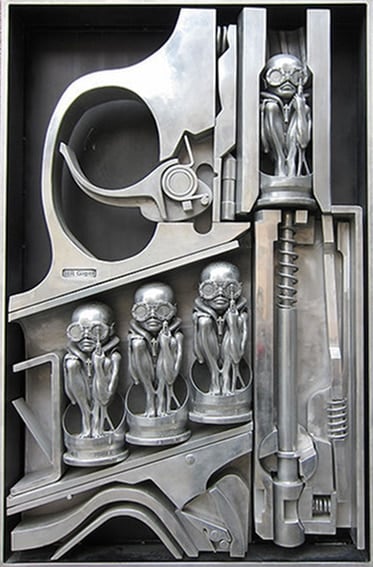 A student of architecture and industrial design, he called his style “biomechanical” and transformed human beings and devices, including guns, into his particular brand of surreal, often nightmarish art.

He was 74 and leaves behind his wife, Carmen Maria Scheifele Giger, Director of the H.R. Giger Museum in Gruyères, Switzerland.

Giger knew how terrifying his works were and in a 1979 interview with Starlog magazine said, “My paintings seem to make the strongest impression on people who are, well, who are crazy. If they like my work they are creative … or they are crazy.”

He also had a soft spot for people who tattooed themselves with his creations.

“The greatest compliment is when people get tattooed with my work, whether it’s done well or not,” he told Seconds magazine in 1994 according to Entertainment Weekly. “To wear something like that your whole life is the largest compliment someone can pay to you as an artist.”

As dark as his works are, they resonate with many and he has directly and indirectly shaped countless creatures, enemies, villains and other things that go bump in the night.

In addition to his essential contributions to the Aliens franchise including “Alien,” “Aliens,” “Alien 3,” “Alien: Ressurection” and the new prequel, “Prometheus,” he also worked on “Dune,” “Species,” “Poltergeist II” and several other movies, designing monsters, props, sets and landscapes.

His movie career began in 1968 when he designed an alien prop for the Swiss short film “Swissmade,” but it was later through peers Bob Venosa and Salvador Dali that he would meet Polish movie director Alexandro Jodorowsky who was then working on a “Dune” movie. While the project was eventually scrapped he’d drawn the eye of Ridley Scott who decided to bring him on board to make “Alien.”

Shortly thereafter he became a name in the music world as an album artist.

Giger worked on many projects large and small and designed album covers and instruments for musicians of all stripes, from hardcore heavy metal, punk rock and good old American rock bands including Danzig, The Dead Kennedys’, Celtic Frost and many others.

While Giger will no longer be around to guide the Alien franchise or help musicians put a unique and equally frightening face on their recordings, in his life he did something special: he made it okay to be scary. Very, very scary. He will live on through his museum, his art and the millions of people his visions reached.

So the next time you’re in Switzerland, be sure to lift a glass to his name. There are two Giger bars, one in Gruyères and the other in Chur, where you can raise a toast to master of things disturbing.