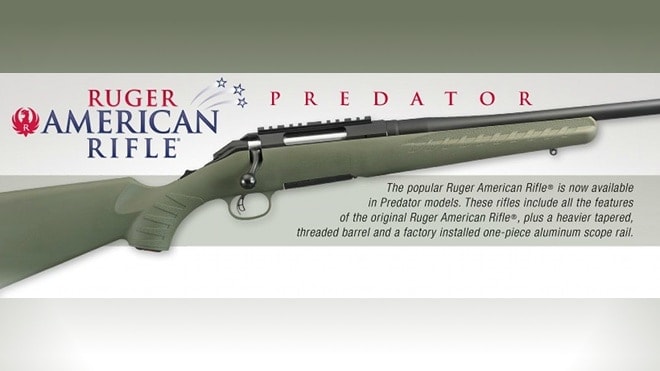 Ruger has announced a new series of American bolt-action rifles, the Ruger American Predator rifles. These build on the solid performance of the relatively young family of American rifles while adding new features to give shooters more options when it comes to picking out a rifle.

The biggest change to American design featured by the Predator series is an updated, heavy-profile barrel that is tapered and threaded for use with muzzle devices. It is available in six calibers: .223 Remington, .204 Ruger, .22-250 Remington, .243 Winchester, 6.5 Creedmoor and .308 Winchester. The .223 and the .308 are on their way to stores now with the other models scheduled for June of this year.

The .223 model has a 1-in-8-inch twist for compatibility with a wide range of bullet weights and has a 1/2×28-threaded barrel. The other models all come standard with 5/8×24-threaded barrels. These rifles are ready to accept all types of muzzle devices, from brakes to suppressors.

“The Ruger American Rifle is a proven performer, delivering outstanding accuracy right out of the box. This new Predator model offers a slightly heavier barrel and other features that our Ruger customers requested,” explained Ruger president Chris Killoy in a press release.

Switching to a heavier barrel means that the Predator series is better suited for target shooting and faster, longer strings of fire. The standard American barrel is designed to be lightweight for hunters looking to cut ounces and shave pounds in the field. While the original is more portable, the Predator will see less point-of-impact shift with its more rigid and less heat-sensitive barrel.

The Predator rifles are still fairly lightweight at about 6 1/2 pounds.

Two other changes are a factory-installed rail for optics and a new moss green stock.

The features that make the original American rifles stand out are all still present with the new Predators. They come complete with Ruger’s “Marksman” adjustable trigger with a pull weight that can be set anywhere from three to five pounds.

They maintain the hammer-forged barrels which have proven to be very accurate, in part because of the “Power Bedding” used in the stock design.

The Predator series uses the same three-lug, 70-degree bolt for lots of scope clearance. The has a full diameter body and dual cocking cams that cycle very smoothly.

They also use the same rotary magazines, which are also very reliable.

And like the original American rifles the Predator series is remarkable affordable, with a suggested retail price of just $489. Realistically these will be priced around $400, which leaves a lot of room in any budget for a solid optic.

Ruger designed the American series from the ground up to incorporate modern manufacturing techniques. They’re inexpensive to produce without sacrificing reliability or accuracy. The new Predator series will no doubt be popular with target shooters and hunters and varminters who plan to shoot volumes.

For more information head over to the Ruger American Predator product page.